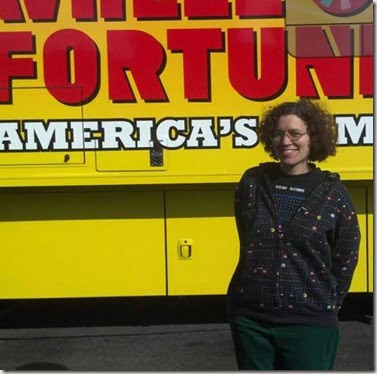 Sarah Manchester of Silver Spring, Maryland, solved the wining puzzle – the phrase “Loud Laughter.” In order to get to that bonus round, Manchester had to solve the prize puzzle, winning a trip to the Dominican Republic, and then also solved the third Toss Up Puzzle — “The Pacific Ocean.”

After Manchester solved the bonus puzzle, the show’s co-host, Pat Sajak, took a peek inside the sealed envelope that the teacher had selected at random by spinning a wheel at the beginning of the round. When he asked her: “Can you use a million dollars?” Manchester covered her mouth and screamed. Going to the show, she revealed to “Good Morning America” her biggest goal was, can you guess? “To win anything in order to hug and dance like you see on TV” She said. Manchester not only got to run, hug and dance her two children, husband and father who were in the audience but took a total of $1,017,490.

The episode was filmed earlier this year and Manchester said she and her family are still deciding how to spend her winnings. 42-year-old Sarah Heidi Manchester teaches and coaches the math team at Takoma Park Middle School in Montgomery County, Maryland. According to her Facebook she attended Montgomery Blair High School and Johns Hopkins University in Baltimore, Maryland. She is married and is a mom of two children, a boy and a girl.

Manchester also said, when she was growing up, she remembers watching the show with her parents. She is the daughter of Paul Manchester, who according to his Facebook page, is Principal Economist at Federal Housing Finance Agency (FHFA) and a former Yale graduate! As we can see numbers run in the family; her mother is Ruth Manchester.

Sara certainly got more than what she expected and we are thrilled for her! Congrats!