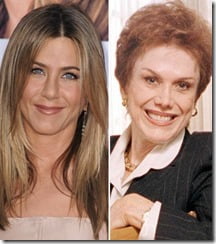 Nancy Dow, we know her as an actress but mostly for the “tell all” mother of beloved star Jennifer Aniston. We can surely relate to Aniston when it comes to  having problems with moms who are just a little over sharing! But when you are 44 and about to get married it might be a good time to reconcile after years of not saying a word to each other! Well think again! Aniston who was once part of America’s beloved duo; Aniston-Pitt tied the knot back in 2000 but failed to invite her mother so why would this time be any different??

Well, according to sources hubby to be, Justin Theroux is playing mediator between daughter and mother! How thoughtful huh! This definitely wins him a couple of points in my book! A friend of Aniston said:

‘Justin has been instrumental in convincing Jen to reconcile with her mother. He’s encouraged her to forgive Nancy for writing a book about Jen and giving interviews about her that she regarded as excessively indiscreet.‘

‘This is the last chunk of disease in my life – my mom.’

So what else do we know about mamma Nancy? 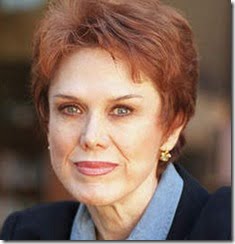 She was born Nancy E. Dow, July 22 1936 in New York City; meaning she just turned 77-years-old just a couple of days ago. She is the daughter of Gordon McLean Dow and Louise Grieco. Her mother was Italian and her father was mostly Canadian of Scottish descent. Nancy is the fourth of six children, all girls her sibling being Joan, Jean, Linda, Martha and Sally Dow.

The New Yorker currently lives in Southern California according to her imdb profile. She was married twice, first to Jack Melick who she was married only for five years, from 1956 till 1961. She had a son named John T. Melick. Nancy married a second time to, Greek actor and “Days of Our Lives” legend John Aniston; they tied the knot on December 11, 1965 remained married for 15 years until they divorced on August 1980. From that relationship the couple became parents to Jenifer.

Back in the 60’s she appear briefly in a few films and T.V shows; under her credits we can mention “The Ice House” a 1969 film where she played Jan wilson and the 1966 hit T.V show “The Beverly Hillbillies” where she appeared in season 5, episode 13 as Athena.

In 1999 Nancy released a book titled ‘From Mother And Daughter To Friends: A Memoir’ which featured revealing details about her relationship with Jennifer. That was the book that started their fight for years now.

We sure hope Jen and mamma Nancy can finally leave their ongoing feud in the past and finally move on! Nancy suffered a stroke two years ago.

What do you think, will Nancy receive and invitation to Jen’s big day or not??