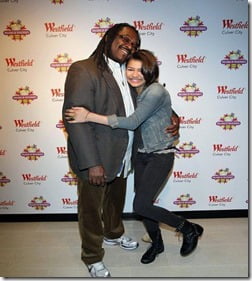 With only 16 yers old but with definitely a lot of swagger Zendaya Coleman is most def the one to watch on Dancing with the Stars season 16. The triple threat youngster-singer, actress, dancer- not only owned the dance floor along with partner Val Chmerkovskiy but also made a special dedication to her grandmother who recently was diagnosed with breast cancer.

This is one thoughtful kid maybe she gets it from dad?? The name, Kazembe (Ajamu) Coleman he is currently Zendaya’s fulltime bodyguard he is super protective of her; this father daughter duo seem to have a great relationship, the Disney Channel star loves to pose with her father for pictures: 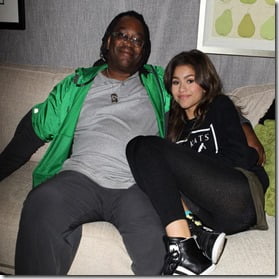 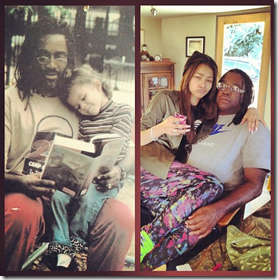 Those are some sweet images huh! We all remember Zendaya from the Disney Channel series “Shake It Up!” Born September 1, 1996, in Oakland, California, Zendaya grew up as part of the nearby California Shakespeare Theater in Orinda, where her mother works as the House Manager. In addition to training at the theater’s student conservatory program, and later performing in numerous stage productions, Zendaya helped her mom seat patrons and sell raffle tickets to benefit the theater.

While attending the Oakland School for the Arts, she starred as Little Ti Moune in “Once on This Island” at the Berkley Playhouse and the breakout role of the male character Joe in “Caroline, or Change” at Palo Alto’s TheaterWorks. She also studied her craft at the CalShakes Conservatory program and at the American Conservatory Theater. Her other stage credits include “Richard III,” “Twelfth Night,” “As You Like It,” among others.

Zendaya, which means “to give thanks” in Shona (a Bantu language native to the Shona people of Zimbabwe), was a fashion model for Macy’s, Mervyns and Old Navy. She was also one of the back-up dancers in a Sears commercial featuring Disney Channel star Selena Gomez. Zendaya also spent three years dancing with Future Shock Oakland, a hip hop dance troupe, and two years dancing hula with AHA, The Academy of Hawaiian Arts.

Zendaya now resides in Los Angeles, California with her family and dog, a Giant Schnauzer named Midnight. Her interests include singing, dancing and clothes designing.

Two years here three years there! Are you kidding me! All at the tender age of 16 this girl should receive a master of something! She is nothing but a pro in the eyes of the judges from DWTS:

“You had this incredible lyrical quality to your movements and you’re so good, but I still feel like the best is yet to come,”

“Your dancing is natural … you move effortlessly,”

Those were some of the comments teamZendaya and teamVal got last night as the dancing couple impressed everyone yet again with their Prom Night Viennese Waltz. Dancing to “Que Sera, Sera” while wearing a replica of her grandma’s dress. She started off in a gondolas, but the duo immediately started spinning around in tandem, moving to the sweeping melody of the song before ending in an tricky floor spin as she was delicately tossed.

What an emotional moment for this family as they all got up to to cheer for them. Kazembe and is wife have five children, he is also a grandfather, since all his children, except for Zendaya, have their own children.