Emma Samms, the actress whom we know from General Hospital is said to be joining season 23 of hit show Dancing with the Stars!

Season premiere is set to air on ABC on September 12th and Emma Samms has been named in the show’s spoilers. For all you passionate DWTS fans, we bring all you need to know about the lovely 55-year-old!

Samms was born Emma E. W. Samuelson in Willesden, London, England on August 28, 1960. The daughter of a ballet dancer mother and business man, father. Her dad owned a rental company for film equipment.

Due to a hip injury at age 15, her ballet dancing days were over and thus acting came along. Her family was struck by tragedy when her brother died at the age of nine, from aplastic anemia.

Before her role as Holly Sutton on General Hospital came, Emma Samms had acted in several TV movies and a miniseries including “More Wild Wild West, Goliath Awaits” and “Ellis Island.”

Emma later would take over the role of Fallon Carrington upon Pamela Martin’s departure. She then went into The Colbys, the Dynasty spinoff, as Fallon.

She returned to Dynasty in 1987 and stayed until the show’s end in 1989. In 1991, she appeared in the Dynasty reunion miniseries.

Samms had a role in a 2013 film, Vendetta. In 2009, she was in a London musical revue, Shall We Dance, at the Sadler’s Wells Theatre, where she danced for the first time in 32 years.

Needless to say DWTS, will be an interesting challenge for her.

These days, she is currently residing in her native England, where she is writing and directing for radio.

Samms did make a return to U.S. television, briefly reprising her role as Holly Sutton-Scorpio on General Hospital in 2015, to mark the departure of Anthony Geary from the long-running ABC soap.

Emma was sort of a player back in the day and it was really difficult to keep track of her relationships (both rumored and actual) when Dynasty was on the air. In addition to dating famed composer Marvin Hamlisch and late actor Jon-Erik Hexum, she was involved with her General Hospital co-star, Tristan Rogers, before she joined Dynasty.

While she was on Dynasty and The Colbys, she was pictured many times with David Corwin –a well-known caterer to the stars, to whom she was briefly engaged. She also dated actor Jonathan Prince, who later became a successful writer and producer, and was rumored to have had romances with famous football player Marcus Allen and both John James (Jeff) and Ray Abruzzo (Zorelli), her Dynasty co-stars. 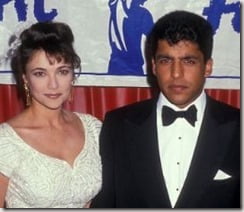 Previously, Nagji worked as a solicitor in London with one of Europe’s largest law firms. He holds a BA and MA from Cambridge University, England, and an MBA with Distinction from INSEAD, France. 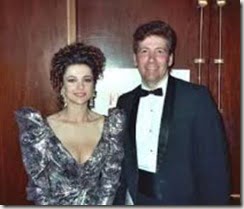 Emma tied the knot to third husband, John Holloway in 1996. This was her longest marriage with the couple splitting in 2003. From her marriage to Holloway, she became a mom of two. She and John Holloway were childhood friends.

Samms has a son Cameron, 18, and a daughter, Beatrice 17, from her marriage to husband John Holloway. Below there’s a photo of her with the two children as toddlers. 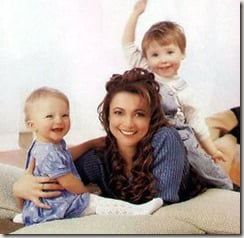 Not much more is known about her own children but what we do know is that her work with terminally ill children has been lauded by being appointed Member of the Order of the British Empire.