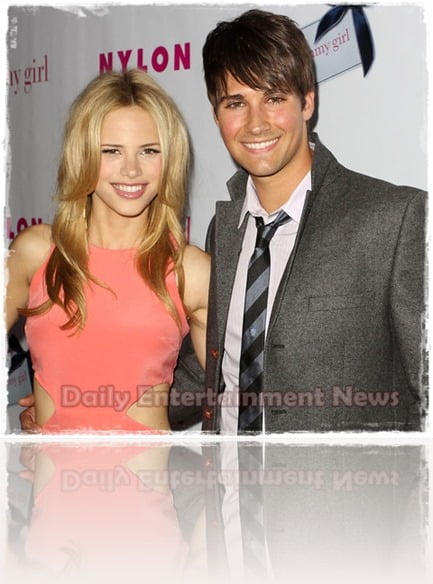 James Maslow is one of the handsome guys from Nickelodeon’s show Big Time Rush, he will be dancing with professional ballroom dancer Peta Murgratroyd during the 18th season of Dancing With the Stars. So we can be sure James’ family and friends will be supporting every week, but what about his girlfriend? Does James Maslow have a girlfriend? Do you  who that is? Is it Halston Sage? or is it Miranda Crosgrove? or could he be dating his dancing partner, **** Peta Murgatroyd,??

Maslow  began his singing training at the age of six and had joined the Children’s San Diego Choir, in 2008 he played Shane in Nickelodeon’s tv series iCarly, in 2009 he joined the cast of Big Time Rush, the series aired on Nickelodeon from November 28, 2009, the series stayed on the air for for seasons, but the boys remained together.

After James, Carlos, Logan and Kendall signed a record deal with Nickelodeon, the band has become quite popular among their fans, they released their first album BTR in 2010, Elevate in 2011 and their last and most latest 24/Seven released on June 11, 2013.

Probably you heard about a certain member of Big Time Rush who got married? but fear no more it wasn’t James but his friend Carlos Pena who got married to actress Alexa Vega. Does James Maslow have a girlfriend? he was linked to Miranda Cosgrove, right? Rumors about a possible relationship  between Miranda and James emerged alright, but he made it clear that they were just good friends. OK, that is all clear up but what about that gorgeous blonde he has been seen with? that probably was actress Halston Sage, she sure is pretty hot and she was for sure his girlfriend, but on May 17, 2013 during the Tad Show on Star 999 Maslow confirmed they were no longer dating, however this photo of them together was posted on Halloween. She was born sage Jean Schrage on May 10, 1993 in Los Angeles, Cali; the eldest child born to Tema and Lenny Sage, her younger siblings are Max and Kate.

It seems that James Maslow has a girlfriend after all and is his DWTS ballroom partner Peta Murgatroyd, according to a source Peta and James met thru a mutual friend before they paired up for DWTS, they went on a date and they hit it off, their relationships is nothing serious, yet as they  are enjoying their time together as a couple on and off the dance floor.

“They really enjoy each other’s company,” the insider continues. “It’s not serious yet, but they won’t be able to hide their chemistry when they dance!”