Daniel Frisiello, is the Beverly man arrested for sending a letter with white powder to Donald Trump Jr. The letter opened by his wife Mrs. Vanessa Trump opened the letter on February 12, 2018. Meanwhile, the white powder was actually cornstarch.

According to the New York Post, the letter Frisiello sent to the President’s son was one of four more letters; Sen. Debbie Stabenow received one at her Michigan office. In addition to her and Mr. Trump, actor Antonio Sabato Jr., Interim U.S. attorney for Central District of Cali. Nicole Hanna, and  Stanford University Law professor Michele Dauber, received letters as well.

24-year-old Daniel S. Frisiello, born on May 24, 1993. He is the son of Stephen and Joyce LeClair Frisiello. He attended Learning Prep School and studied Legal Administrative at North Shore Community College.

His father a graduate of Massachusetts College of Pharmacy and Health Science, is a pharmacist at Preferred Pharmacy Solutions; Prior to that, he worked for Omnicare, CVS, and Merck-Medco.

Furthermore, according to his Linkedin’s profile, Frisiello a 2013 graduate of Beverly High School is Bucci Market’s General Manager in Beverly, Massachusetts. On Facebook, he claims to be a program assistant at Catholic Charities Archdiocese of Boston. Prior to that, worked at Northeast ARC. 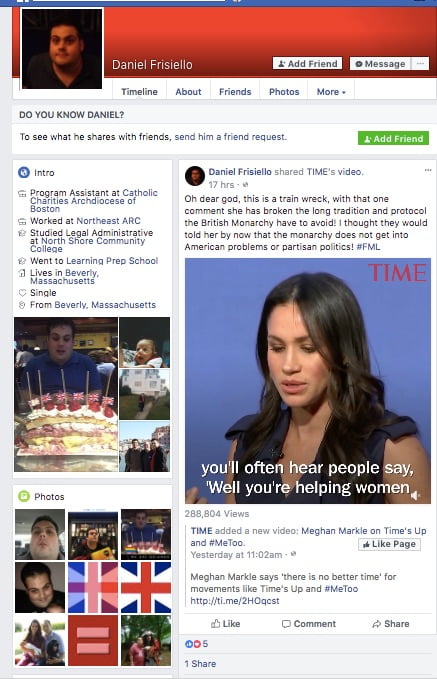 Looking at his posts on social, Frisillo is clearly fascinated by England and British’s royalty.