Dedrick D. Williams has been named as the man who pulled the trigger on rapper XXXTentacion a couple of days ago.

The 22-year-old was arrested in connection with the rapper’s killing after he was leaving a motorcycle dealership when two men approached his vehicle and gunned him down.

Williams faces charges of first-degree murder, a probation violation for theft of a motor vehicle and driving without a valid license. According to reports authorities are still looking for other suspects. Police thinks Dedrick D. Williams and his alleged accomplice didn’t mean to kill XXXTentacion but their heist went wrong at some point and ended up opening fire, subsequently shooting death the up-and-coming rapper.

The suspects then fled the scene in Deerfield Beach in a dark-coloured SUV. 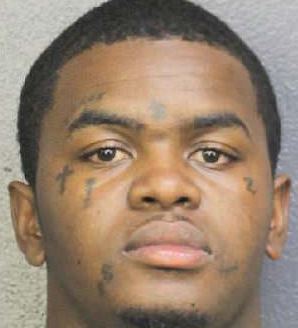 His charges include first-degree murder, driving without a valid license and a probation violation for theft of a car.

This is not the first time Dedrick gets in trouble with the law, at 22 he possess a criminal history that includes arrests for cocaine possession and domestic violence.

Dedrick D. Williams, full name Dedrick Devonshay Williams is a native of Pompano Beach, Florida. Dedrick who makes a living as a tattoo artist and has numerous tattoos across his face –is active on social media.

He keeps an active Instagram account in which he often uploads images of him with large wads of cash. He also posts about his tattoo work. Until recently he worked at Zombiez Ink. Records show Williams has been involved in numerous altercations with the law. He has on his back at least 11 felony arrests for charges like cocaine possession, weapons possession, domestic violence and aggravated assault with a firearm. A few year ago he was accused of holding a gun to his girlfriend’s head.

Shockingly enough, it appears he’s never served any jail time for his slew of charges. However, he is currently on probation for grand theft auto, and records show he violated his probation in December 2016 when he was caught with a firearm.