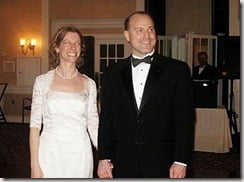 A 10-month-old baby miraculously survived after his mother leaped to her death from an eighth-story window, in Harlem on Wednesday.

Cynthia Wachenheim hold her son Keston close to her chest and jumped around 3:30 pm from her building on Bradhurst Ave. near W. 147th St. She landed on her back on the pavement and instantly died. Baby Keston bounced off his mom on impact and then rolled away from her arms, a policeman took the baby to the hospital where he is said to be in stable condition.

“I heard a small scream when she was in the air,” said 18-year-old witness Steven Dominguez. “I noticed something falling, but I didn’t want to believe it was a person.”

He also said the landing made a horrifying sound, Dominguez teared up as he spoke.

“It was a loud bang, it sounded like a big piece of wood hitting the floor. When I got closer, I saw the baby crying,” he said.

Wachenheim left a 13-page handwritten suicide note where she talked about not being happy and what she planned to do, a source said. She thinks she’s a failing mother, on the last page she refers to postpartum depression. She also said to her husband that she loved him and she knew he was making him suffer. In the note she said to him:

“I love you. I’m making you suffer. You’re going to think I’m evil,’” a source said.

In the note, she mentions little Keston having a physical handicap, she was convinced her baby had cerebral palsy, although doctors said there was nothing wrong with him, said the source.

Cynthia’s 48-year-old husband, Hal Bacharach, was at work when his wife jumped. A surveillance video showed Hal leaving the building at 12:55 pm, less than three hours before the leap. Neighbors said they heard a loud argument.

“He was yelling at her today,” said Christian Johnson, 37. “It made me stop and listen. He was asking her why she wouldn’t pick up the phone. He kept repeating it. Then, the baby started crying.”

44-year-old Cynthia was born on May 18, 1968. A high school valedictorian in Albany and a Columbia Law grad, she worked as a  Asc. Court Attorney in the Supreme Court New York County division of the Judicial agency since 1997, and was on maternity leave from her $118,000-a-year job.

Her parents are Kurt, 82, and Estelle, 72, both Albany residents. Her brother is Ronald, 48, from NY, and sister Deborah, 42, from Massachusetts.

Cynthia lived in the two-bedroom condo with her husband, who works in sales, and their baby Keston, who recently turned 10 months old and started walking, said Christian Johnson, a neighbor.