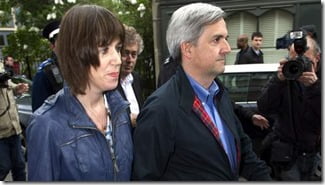 Former political reporter and media consultant Carina Trimingham 45, can rekindle flames with her now free lover ex-minister Chris Huhne! The bisexual woman and Chris got first involved and caught with Carina when she worked for him as his personal PR adviser in June 2010, after being observed and photographed spending a night in his constituency home with a woman other than his wife, Huhne admitted that he had been involved in a relationship with Carina Trimingham and stated that he had decided to leave his wife-to be with her.

Now this is where it gets jail serious! Huhne’s ex-wife-Vicky Pryce- in revenge for his affair blew the whistle on him for perverting the course of justice a decade ago when Pryce took speeding points for her then husband. The couple were jailed after Huhne admitted passing on speeding points to his then wife in 2003. 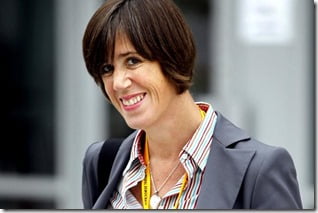 I guess in her bid to ‘nail’ him, she forgot she could also face prison??

Getting back to Carina; she was seen looking very happy next to Chris who was set free only after 62 days in jail out of an eight months sentence. Huhne, 58, left Leyhill Prison in Gloucestershire and returned to the home he shares with girlfriend Carina Trimingham to start rebuilding his life. With Ms Trimingham at his side, the former Energy Secretary apologized again for his crime and thanked his supporters for standing by him.

Although you would think only Chris’s ex-wife was the only one cheated Carina herself cheated on her partner, a woman! Miss Trimingham’s civil partnership with Miss Bennett, witnessed by family and friends, took place on June 16, 2007 meaning Carina had also a serious committed relationship with a woman named Julie Bennett. 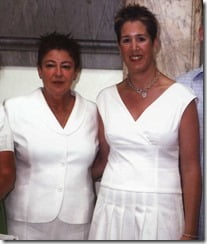 Miss Trimingham, says friends, has always regarded herself as a *******, although even before her relationship with Huhne, her behavior had caused confusion. I guess she never knew what she was missing when it comes to men?? Not really since In 1999, she quietly married medical practitioner Lawrence Woo, at Islington Town Hall, the same place where she and Julie later celebrated their civil partnership; but that didn’t last for long divorcing only a couple of years later.

I mean in all seriousness she went from “ I think I like man” to women lover to “wild *** with former minister” out of the blue!

There is no doubt she had a more serious involvement with Miss Bennett  and when Trimingham ended their relationship while she was working as campaigns director of the Electoral Reform Society. As she initially confided in friends saying how passionate her relationship with this unidentified man had become! Then proceeded to leave Julie whom she had shared a long relationship before making it official for several years-devastated.

A close friend of the couple said:

‘They just seemed to thrive in each others company. Both of them loved traveling and they’d been together for several years. It wasn’t a rushed thing. No one who attended that wedding would have seen this drama coming.’

Carina who is described by friends as a happy, positive, confident woman left friends in shock when she made her big turn around and left her long time partner.

Now Trimingham and Huhne have been reunited, the couple lives in Clerkenwell, central London.