Baylee Curran is the hot model who accused Chris Brown of pointing a gun at her! The blonde is speaking out after spending ‘one of the most terrifying moments of her life.’

The stunning Baylee Curran called the cops on the 27-year-old singer/songwriter after she claims Brown pulled a gun on her. Miss Curran told E! That on August 30th, she was only looking at jewelry inside of Brown’s kitchen, when suddenly he ‘kind of went off, pulled out a gun and said, ‘Get the f–k out.'”

Curran allegedly walked out but came back to retrieve her cellphone and shoes. A friend of Brown told her she had to sign an NDA first but she refused and ran down the driveway. She believes it was then when neighbors called authorities.

Chris has since emerged from his home after an hours-long standoff with LAPD.

The 24-year-old says she had previously hung out with the R&B singer without incident. 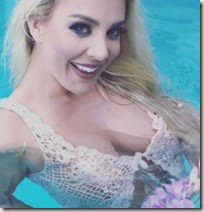 But Baylee who is also an equestrian, happens to have kind of a shady past, that or the **** blonde is prone to get in trouble. 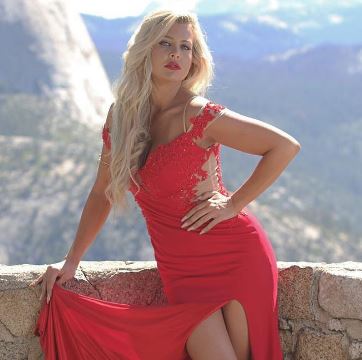 As it turns out, Baylee Curran is not exactly the angel face she appears to be. Accoridng to recent reports, she was involved in ‘grand larceny’ a couple of years ago. As it was expected her shady past is coming to light in the form of a complaint report made against her.

Back in 2014, Baylee and another female entered a room inside the Plaza hotel.  Police reports say the person that Bailey was with took a wallet and they both fled on foot. Inside the wallet was $200 and the person’s wallet was a Michael Kors black worth $1,000. There were also credit cards in the wallet.

As a result there is a warrant against the **** blonde and if she’s found by police in NYC, she could be taken in for questioning. Per TMZ, her lawyer says she was unaware of this warrant and says it was her friend who committed the crime.

Is she a victim or not?