Rebecca Stulb is the loving and supportive wife of attorney and politician, John Kennedy –whom we know as the Senator of Louisiana.

Rebecca’s husband is a Democratic Party member who served terms as Louisiana state treasurer and took office as Louisiana’s junior senator in the United States Senate earlier this year.

Born November 21, 1951 as John Neely Kennedy, he attended Vanderbilt University in Nashville, Tennessee, graduating magna *** laude in 1973 with a degree in Political Science, Philosophy, and Economics. He then received a J.D. degree in 1977 from the University Of Virginia School Of Law in Charlottesville, Virginia.

In the late 80’s he became special counsel to then-Democratic Governor Roemer. In 1991, he was appointed cabinet secretary where he served for one year. Following his first stint in state government, Kennedy returned to the private practice of law until 1996. That same year, he was appointed Secretary of the state Department of Revenue. He was elected treasurer of Louisiana in 1999 and reelected in 2003.

But John Neely isn’t the only attorney at home. His wife Rebecca “Becky” Stulb is also a Louisiana attorney who is a current member of the Louisiana State Bar. She can also be easily found on a number of legal directories in Louisiana. She worked in the Chaffe McCall law firm. 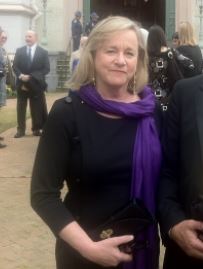 Rebecca Kennedy was born Rebecca Ann Stulb on March 26, 1952; the Louisiana native holds a Bachelor of Arts from the University of South Florida and her Juris Doctor from Tulane University.

Married for over two decades, she and her husband are the proud parents of a grown son. The attorney and devoted wife is the loving mother of son, James Preston Kennedy.

Their 21-year-old son, grabbed headlines last year after he was sued by his neighbors. Preston who lives with his parents in Madisonville was accused of throwing a party at their house while they were away from home.