In Val Kilmer news, the 55-year-old actor stunned in photos today as he stepped out to attend church. The beloved actor was pictured as he covered half his face and carried what appears a medical bag.

Earlier this year it was reported Kilmer was suffering from throat cancer and family members reportedly said he would not get treatment because he believes religion will cure him.

According to TMZ, He has known about his tumor since last summer and had done nothing about it until he was rushed to the Hospital back in February. The gossip site was told he had surgery. 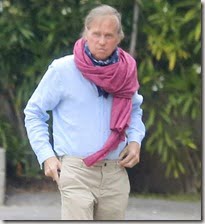 Val Kilmer was married to English actress Joanne Whalley from 1988 till their divorce in 1996. She was born in Salford, Lancashire, but brought up in Stockport, Cheshire.

Joanne began acting at a young age in small parts in soap operas. In the early 80’s she joined a band and was later the lead singer of pop group Cindy & The Saffrons, they split after two singles. She and Val met while working on the fantasy adventure Willow, by that time she had already gained fame for her role on British TV as Emma Craven in Troy Kennedy Martin’s Edge of Darkness.

She and Kilmer were soon hitched and she moved to Hollywood with her husband. Whalley, is also known for her role as call girl Christine Keeler in the 1989 film Scandal.

She gave birth to the couple’s two children: daughter Mercedes, born on October 1991 and second child, son Jack on June 6, 1995.

She filed for divorce in 1995 citing irreconcilable differences, however that hasn’t stopped the acotrs from working together, like they did in the film “Twixt.” 23-year-old Mercedes Kilmer has followed into her famous parents footsteps. The young actress is not very into social media but her IMDb page, says she’s had roles in three films. Her most recent work called ‘Ingrid’ is in post-production.

Last but not least we have,  Jack Kilmer who is also an actor but until recently he preferred other ways of expressing himself like music.

He first learned to play the drums, and gradually picked up several other instruments, even performing in a band during high school. Still, he’s never played with his father, who famously portrayed Jim Morrison in Oliver Stone’s “The Doors.”

Jack has credited filmmaker Gia Coppola –whom he met while attending The Center for Early Education –for showing him to see acting in a different way.

The 19-year-old actor can be seen in “Len and Company” opposite Rhys Ifans and Juno Temple. His acting debut was in the 2013 film “Palo Alto.”

We are not sure if the actor is being cared by family members or if he’s in a relationship with a special someone. We wish him the best!

If you are a fan, what would like to say to the actor?