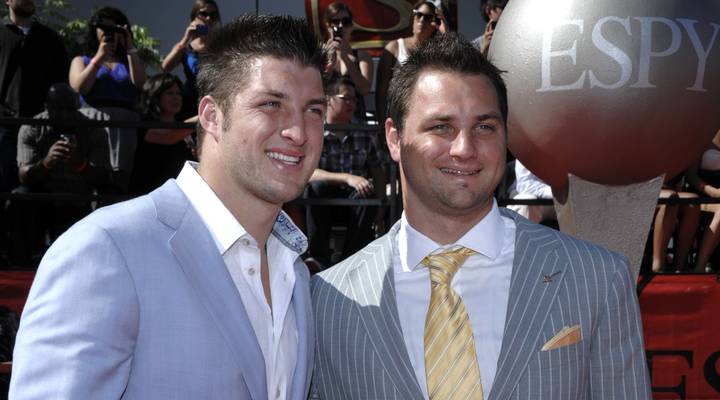 Peter Tebow was pulled over on June 10 of 2011 for speeding. When the cop approached the vehicle, he “observed that [Tebow’s] eyes were bloodshot and watery, his speech was slurred and mumbled and his pupils were enlarged.” He told the cop that he had taken Percoset.

In the report, the cop says he also smelled booze on Peter’s breath … but Peter refused to take both a road sobriety test AND a blood alcohol test.

Peter, who was 26 at the time, was eventually arrested and hauled to a nearby station where he was booked. He was later charged with reckless driving and DUI. But when taken to court, the DUI was dismissed and reduced to a simple speeding ticket. He was fined $276.00

Now we don’t know the whole story, although Tim was with the Denver Broncos at the time.

So that’s one side of Peter.

In March of 2012, the 27 year old Peter, delivered his first sermon at Highline Community Church in Littleton. And while he attracted a significantly smaller throng than did his famous sibling, he’s seen as a rising star in the Christian worship community.

And here’s another side of this many sided guy, in January of this year he tweeted his happiness at the Bronco’s loss to the Ravens. He did later apologize. He tweeted in August that he had become engaged, but this has yet to be confirmed.

So, angel o devil? Maybe like most of us he’s a little bit of both.