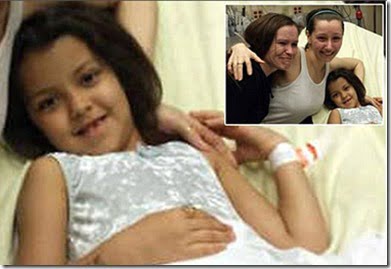 Amanda Berry one of the three women held against her will for a decade in a house in Cleveland owned by Puerto Rican Arial Castro, gave birth to her six year old little girl. Amanda’s daughter is thought to have been born in the captivity imposed to her mother for 10 years by Ariel and his two brothers Pedro and Oneil Castro

As investigators work to put all the pieces together in the Cleveland OH, kidnapping of Amanda Berry, Gina De Jesus and Michelle Knight; we wonder about Berry’s little daughter Jocelyn Berry.

As little Jocelyn was examined by medics she ate an ice lolly and looked happy along with her mother and new found aunt.

“She looks great, happy, healthy and ate a popsicle last night. Seeing her mother smile made her smile.”

FBI Special Agent Vicki Anderson said the girl is missing a front tooth and had been home-schooled by her mother during their reported imprisonment. Can you begin to imagine what this little girl may have lived, seen, felt?? Not being able to have a normal upbringing, not being able to go play with other kids her age and fooled into believing she was safe within a family with mommy and daddy and…?? The story gets creepier by the minute according to reports Ariel Castro would take Jocelyn out at weekends to visit his mother Lilian Rodriguez, and that the little girl would call her “grandma”.

But the questions about 10 years of being held captive are starting to pile up; Jocelyn might have been living a dream within a nightmare and it’s only obvious to wonder who of the three brothers could be her father?? Police believe Jocelyn’s father is one of the brothers and hope to determine her paternity through DNA tests. This meaning perhaps Amanda may not be sure of who could be.

It is feared other babies were born inside the Cleveland house. At least five children may have born at the house! One victim suffered up to three miscarriages because she was so malnourished, while other sources say the captors would beat the pregnant women, so that the babies would not survive.

It is unknown what happened to any children who were born at the home, it seems little Jocelyn is the only one who made it. All three women were abducted between 2002 and 2004, Berry and DeJesus were in their teens at the time of their kidnappings and Knight was 20 years old.

Now thanks to her mother will to live little Jocelyn can have a real and normal life. What a ghoulish story with a happy ending.