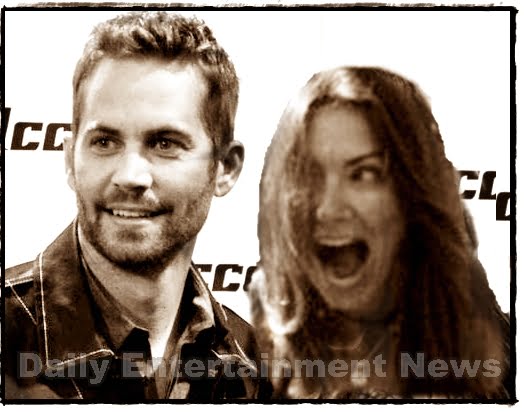 The Fast and Furious actor Paul Walker has died Saturday November 30, 2013 when he an another passenger Roger Rodas lost control; of his Porsche, crashed into a tree, the car exploded bursting into flames. Paul Walker leaves behind his parents Cheryl Crabtree and father Paul Walker III, plus his longtime girlfriend Jasmine Pilchard Gosnell, daughter Meadow from his relationship with Rebecca McBrain, also known as Rebecca Soteros 40-year-old Paul Walker dated Rebecca Soteros in 1998, they welcomed their daughter Meadow Rain Walker on November 4, 1998. Walker was 25 but he refused to marry her, claiming that he was not mature enough even though it left him feeling like an ‘evil SOB’.

When Meadow was still a child when Rebecca moved from  Hawaii to Cali to be close to Walker, they decided it was for the best not to get married, eventually they split up  in 1999, Rebecca remained close to Walker  and Meadow stayed with her in Hawaii.

39-year-old Rebecca Soteros born Rebecca Jo Soteros in 1974, to Julie Ann (passed away in July, 2004 at the age of 48) and Mark Soteros, 65. Rebecca or Becky Jo graduated in 1992 from Village Christian School. We think Rebecca has one younger brother named Joshua, 36. Like Paul, Rebecca was in her 20’s when she had Meadow, who moved in with Paul in California  two years ago, we have been told Soteros flew from Hawaii to Cali to be with Meadow after the tragic death of Paul.

A couple of years ago when Meadow was 13, Paul spoke about her

“She’s a bit more like her mother [Rebecca], but she’s also how I am innately,” Walker, 38, says. “[Meadow]‘s more of a free roamer and she appreciates the little stuff.”

We can’t confirm, but according to this site Paul walker’s former flame Rebecca McBrain is the now wife of Nicko McBrain drummer of the heavy metal band Iron Maiden, If this is the case, you probably remember Rebecca McBrain of Whitman, West Virginia was arrested arrested and charged with domestic battery earlier this year. But…….

But listen up, these two Rebecca are “NOT” the same person.

This Rebecca McBrain is DEFINITELY “NOT” the same woman Paul dated years ago, Meadow’s mom moved back to Hawaii and sources close to her told us she is too devastated over Paul’s tragic death; for years we have known the name of Paul Walker’s ex-girlfriend and mother of his only daughter Meadow Rain Walker was Rebecca McBrain, we even reported the story about her n Saturday, November 30, but it was until recently that it came to our ears that the real name of Meadow’s mommy is Rebecca Soteros, perhaps she got married and took her husband’s name. Do you know?

Here is what he said about her a couple of years ago, they share custody of their daughter and have a great friendship relationship.

‘I knew where I was at with chicks and having fun. I mean, I was sleeping with her (Rebecca’s) friends, for crying out loud. You know what I mean?

‘I was an animal, and so I want to be there and my heart wants to be in it, but the mind just isn’t following it. I love my daughter so much, and I love her mom too. We get along so well as a result of me playing it the way that I did.’


Rebecca’s drinking had been a constant issue for arguments between Paul and Soteros, their daughter Meadow asked Paul in 2011 to move in with him after Soteros’ drinking became unbearable. Rebecca was arrested for DUI again in Hawaii last year.