19-year-old Shayne Murphy, yes Murphy as in the daughter of the former couple, actor Eddie Murphy and model, Nicole Murphy is attempting to follow on mama’s footsteps.

According to TMZ the hot 19-year-old was part of a **** shoot along with 24-year-old equally hot sister Bria. This was Shayne’s first attempt at modeling and according to the photographer, the girls wanted to use the shots to pitch themselves to Victoria’s Secret.

Want to see how she came out??

So, do you think she’s got what it takes to  be an “Angel” with wings and all?? Shayne who is an English major according to her twitter account sure has blossomed into a **** young lady. The picture next to her dad was taken just three years ago and you can tell how sweet and shy she looked, but now, she has turned into one beautiful young woman. Having an older sister and a model mom might help! 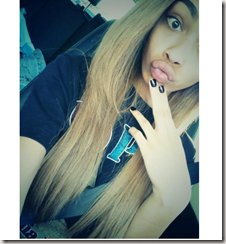 Her mother and her famous father were in a long time relationship before tying the knot in 1993, but five children later and over a decade of marriage were finalized when Shayne’s mom, first filed for divorce in 2005. Shayne also has two stepbrothers, Christian Murphy born in 1990, from her dad’s relationship with Tamara Hood; and Eric Murphy born in 1989 from Murphy’s relationship with Paulette McNeely. After her father split from her mother he began dating former Spice Girl Mel Brown and from that relationship, Iris Murphy Brown was born, and although Shayne’s father denied her at first DNA tests confirmed Murphy was the father. So, Shayne has also one stepsister, little Iris born in 2007.

Now both her parents are in what it looks to be good-healthy relationships, her father with gorgeous Paige Butcher and her mother with fiance Michael Strahan. Now we don’t know if she will get in trouble for conducting her ****-lingerie shoot in mama’s master room but who cares! She and sister look hot!!