Robert Vance has been idetified by Florida police as the crazy driver who drove his car into – and over – a motorbike coming back from a Memorial Day bike ride for veterans.

The jaw-dropping moment of road rage was captured on camera Monday. Vance, of Land O’Lakes, has a lengthy criminal history including charges for trafficking the synthetic drug MDMA and driving without a license, according to Florida Department of Correction records.

According to Navy veteran Joe Calderazzo, he along  with a group of fellow motorbike enthusiasts, were was making his way through Lutz, Florida, when Robert Vance ran one of them off the road at around 5:30pm.

They caught up with him and began a loud argument which was filmed by a man in a car nearby. But the footage takes a shocking turn when the driver apparently attacks the bikers with his car.

In a blink of an eye, Vance who was driving a silver sedan parked to the side of – and just behind – the motorbike, on which Calderazzo and a female companion are sitting –suddenly goes forward and to the right, dragging the bike’s two riders down.

Fortunately, both Calderazzo and his friend can be seen getting up quickly as Vance runs off with his car. Though reports say,  Calderazzo escaped with only a broken leg. His friend Melanie – who was also on the motorcycle – was hospitalized overnight – with cuts, scrapes and an injured ankle. 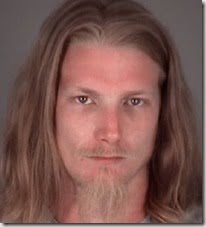 As a result, 31-year-old Vance, f Land o Lakes Florida, was arrested a short time later and has been charged with a hit and run, a moving traffic violation and aggravated battery. He admitted to hitting the victim and vehicle, and leaving the scene.

Robert Paul Vance allegedly went to change his tire at a fire station and was tracked down by police. He was arrested on Lutz Lake Fern Road, not far from where the crash happened. They found a spare tire on the car and a shredded tire in the trunk .

The repeat traffic offender is being held without bond at the Pasco County Jail.