Ivan Hall is one among the men casted in season 16 of The Bachelorette, originally starring Clare Crawley who has now been replaced by Tayshia Adams.

28-year-old Ivan Hall was born in Chicago and grew up in Plano, Texas. He currently resides in Dallas, Texas. The young man is not only a good-looking fella, he is perhaps the brainiest of his fellow contestants.
Believe it or not, he is actually a scientist! No wonder he is, according to spoilers, one of Tayshia’s final three suitors. Besides who wouldn’t like someone who goes by “Sweet Ivan” right!

From his LinkedIn, Ivan is a Senior Software Quality Engineer for Lockheed Martin, where he’s worked on and off for the past five years.
He attended Texas Tech University in 2015 with a Bachelor of Science (B.S.), Industrial Engineering. He began his career as an intern working at CME Group. He also previously worked at Northrop Grumman as their systems engineer, from 2017 until 2018.

The aeronautical engineer is not only great at what he does but also at keeping in shape. 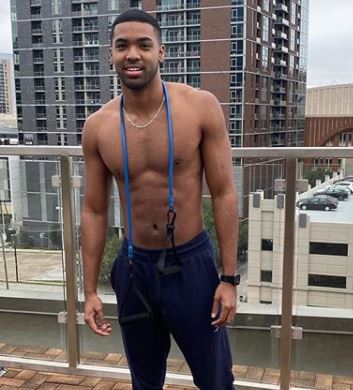 His social media bio also states that he’s an “investor,” which makes sense given that in his Bachelor bio, he writes that he wants to own an “exotic rental car company” one day.

In his Bachelor bio, Ivan describes his job as “building jets for the U.S. military.” He also goes on to reveal he is close with his mom and talks to her “every day.” He loves high-end cars, Filipino food (courtesy of his mom’s cooking), Crocs (he considers himself a “recovered” enthusiast).
What is he looking for in his dream woman you ask? Apparently, “intelligence is a huge aphrodisiac to Ivan, and nothing turns him on more than getting into a spirited debate with the woman he loves.”

Ivan who isn’t that great at updating his IG page, shows shots of him with his family, attending Mavericks basketball games and traveling. Just pretty wholesome typical stuff. Among his photos, we founf that he also keeps a close relationship with his father and siblings.

Do you see it happening for Ivan and Tayshia?
Check him out on Instagram here.