Jason Foster is one among the men casted in season 16 of The Bachelorette, originally starring Clare Crawley who has now been replaced by Tayshia Adams.

Jason, a former offensive lineman, began his NFL career on the Indianapolis Colts from April 2012 until Sept. 2012. The following month, he was signed by the Oakland Raiders, where he played until Dec. 2013. Then, Jason was signed by the Tampa Bay Buccaneers in Dec. 2013, but his time on the team was short-lived. The Bucs released Jason the following August. In 2015, he played for the BC Lions in the Canadian Football League, but after 18 games, he was released by the team in Feb. 2016. 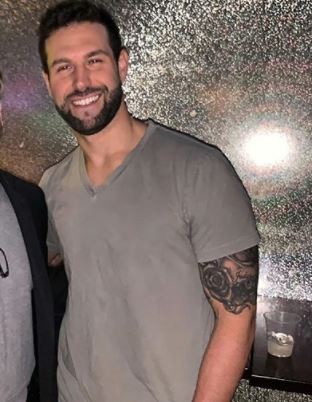 You gotta love the 32-year-old’s great sense of humor, on social media he calls himself ‘Former fat guy for the NFL/CFL’ -which is actually not far from the truth since Foster has lost major weight since his retirement. The former football player revealed he actually ended his career to take batter care of himself and after suffering several concussions on the field.
After sticking to healthier lifestyle, Foster has been able to shed 120 pounds. At the height of his football career, he weighed 326 pounds.

Nowadays, Jason works in IT Staffing. According to his LinkedIn, he has worked at Signature Consultants in the Washington D.C. area since 2016. He started as a Resource Manager, but was named Account Manager in April 2018.

According to his ABC Bio, Jason is an animal lover specifically dogs saying he “would open his home to every dog on the planet that needs one”
From his social media we can tell Foster knows how to have a good time and his never-ending smile is definitely infectious. He has also shared a handful of photos with his family.