Josh Dobbs was recently seen very much close to model and reality TV star, Hannah Ann Sluss who was until recently a contestant on The Bachelor.

Earlier this week we found out that Hannah Ann Sluss was actually the contestant that pilot Peter Webber proposed to after Madison Prewett eliminated herself. Days later, he ended up dumping Sluss for Prewett.

It all went down a few months ago when actual production of the show wrapped and since then, Hannah Ann Sluss is pretty much over it, however she got her glory minute during the tell-all ceremony earlier this week. Hannah who was Peter’s mom favorite told her ex “If you want to be with a woman, you need to become a real man”

She may have already found her ‘real man’ in NFL quarterback Josh Dobbs. According to People the two were pictured together earlier this month, so what’s the deal between them? Who knows, so far they haven’t denied or confirmed anything.
However, pictures speak louder than words and in an image by Reddit, 23-year-old Sluss is seen cozying up to a man in a Tennessee bar with some fans noting is Josh Dobbs. 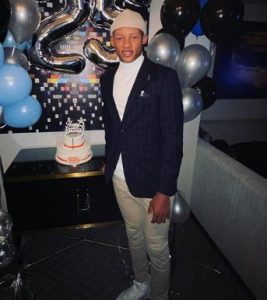 The model who hails from Knoxville, Tennessee; is the daughter of mom Jennifer Sluss, and is the oldest of three children. She has a sister, Haley and a brother, Wade.
In addition to modeling, she’s also into interior decorating and painting. In fact, she combined her skills on her home -which is decorated with artwork that she painted.
She signed a contract with famous agency Wilhelmina Models. She’s also been represented by Campbell, Model Club, The Block Agency and most recently, Next Models.
As a model her work has been varied; she’s done print ads and represented a Vanity Fair collection in 2017. She even appeared in a music video -Sluss played the female lead in the music video of Chris Lane’s “I Don’t Know About You”

Her alleged new man, Josh Dobbs is a quarterback for the Jacksonville Jaguars. Before that, he played for the University of Tennessee Volunteers. While in school, he majored in aerospace engineering and won the Torchbearer Award in 2017.
That same year he was drafted in the fourth round of the draft to the Pittsburgh Steelers.
Find Josh Dobbs on Instagram here.