Tom Sandoval is the fellow reality star boyfriend of Ariana Madix -with whom he stars on Bravo’***** show, Vanderpump Rules.

Tom’s girlfriend has been recently getting some heat after fans noticed major sequence differences on an apisode in which she has a conversation with Lisa about depression, ledding viewers to believe the show is scripted and not very real after all.

Born Ariana MAdix on June 24, 1985; the Florida native graduated with a Bachelor of Fine Arts in theatre and broadcasting from Flagler College and later studied at New York University’s Tisch School of the Arts.
In her forming years, Ariana was an award-winning Equestrian rider and also a national champion in cheerleading, pom-jazz dance, and hip hop dance.

In additon to Vanderpump Rules, shes also been seen on ESPN.com’s series NFL Writer’s Room. She’s been featured on MTV, CollegeHumor.com, and New York Magazine.
While on the show, she’s worked as a bartender on Lisas’ restaurant SUR -where he and current boyfriend met. 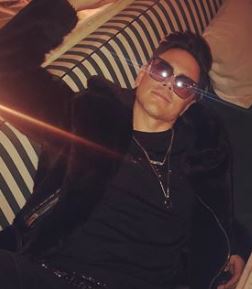 Tom Sandoval was born July 7, 1983; in St. Louis, Missouri. The son of Anthony Sandoval and Terri Green, has one brother, Brian.
Tom first gained notoriety after being casted on Vanderpump Rules, eventually becoming SUR’s top bartender. Tom who is also a musician and model, has a couple of acting credits including a 2008 film called Playing With Fire. He also made a guesst aparition on the very first season of The Hill.

In Addtion to his bartending job, he also opened his own bar TomTom with Lisa Vanderpump and has worked on a cocktail book, Fancy AF along with Madix.
Sandoval is also part-owner of the “Best Bar in Los Angeles” where he serves as manager -alongside partner Tom Schwartz.
Tom and Ariana currently live in a $2 million home in Los Angeles -which the couple bought in 2018.