Evelyn Yang is the lovely wife of wife of entrepreneur Andrew Yang -the 2020 Democratic presidential candidate.

Evelyn’s husband is a tech entrepreneur who is vying for the Democratic presidential nomination. Prior to giving the presidential spot a shot, Andrew served as a corporate lawyer, healthcare startup entrepreneur, CEO of Manhattan Test Prep, Founder and CEO of Venture for America.

In the mid-200s, Yang -who Yang graduated from Columbia School of Law -was the CEO of elite test prep company Manhattan GMAT, which he and his partners sold to Kaplan in 2009. Yang went on to create Venture For America, a program that sends college graduates to work at startups in cities hit especially hard by the financial crisis.
Yang received a Champion of Change Award from the Obama White House in 2012, and was named a Presidential Ambassador for Global Entrepreneurship in 2015. 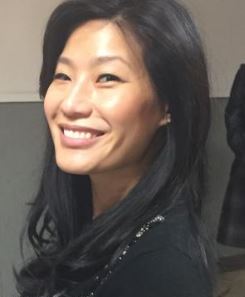 He’s been happily married to wife, Evelyn Yang since 2011. Yang and his wife Evelyn have two young sons. Their eldest son, Christopher, is autistic. The family of four resides in New York and while her hubby keeps busy on the campaign, Evelyn keeps busy with the couple’s children.

Evelyn Yang was born Evelyn Lu on October 31, 1981; she met her future husband during an event at the campus of the Columbia University in New York City. Evelyn who attended Columbia and studied in Shanghai as part of her program left her corporate job to become a mom. She was a marketing exec at L’Oréal.
Evelyn who is now a full-time mom has appeared a number of times accompanying her husband on the trail. She has had a moderate role in the campaign appearing in videos in which she speaks in behalf of her husband and speaking out about her son’s autism.

In recent reports, Evelyn Yang has come forward accusing her gynecologist, Robert Hadden of assaulting her in his examination room when she was seven months pregnant with her first child. During the alleged assault, Evelyn said she “froze like a deer in headlights” and tried to avoid his gaze, “just waiting for it to be over”
She is one of over 30 women suing Hadden who was convicted of assault in 2016.