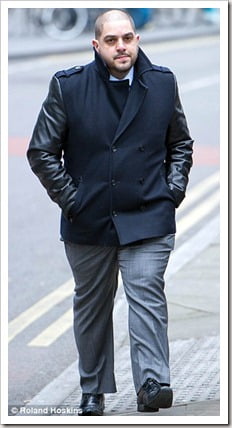 Derek Rose, 33, cried when he was found guilty of blackmailing the socialite. The jury is yet to decide on his co-defendent Jakir Uddin, 20. The pair was accused of trying to extract money by lying about a kiss-and-tell.

Derek Rose, 33, shot an email to the rich star’s agent, Dana Malmstrom, warning her he would sell spicy stories about their *** life to the tabloid press if she did not pay.

Rose dated 28-year-old Ecclestone, the daughter of Formula One great Bernie Ecclestone, when she was 17, and was engaged to her until he discovered she had cheated on him.

He was dressed in a grey suit, when the jury delivered the decision.

In an email the heiress was asked to pay a £200,000 ‘non-release’ agreement within five days, which claimed falsely that a tabloid had given them a deadline to accept a money deal.

Ecclestone’s agent Miss Malmstrom replied in November 2011 stating they would not be pursuing their bid at that time but ‘thank you for getting in touch.’

The two were arrested after Ecclestone called the cops when Rose without expecting tweeted her 19 days later saying:

Ecclestone confronted her blackmailers in court last week and said Rose was her only boyfriend who tried to do that to her.

She said she first heard of the plan from The Sun journalist Alex West at a charity event at Great Ormond Street Hospital in November 2011.

She said to the court:

I asked if it was Johnny Ketterman and he replied “yes, but don’t worry, The Sun wasn’t going to run any story.

I thought it was him partly because Johnny had sold a story on me previously and I’ve never had a boyfriend sell a story on me before, and because of the physical description that Alex West described to me and what his character was like.

The message was timed to match with the second incident of a three-part series on Ecclestone aired on TV.

When the cops raided Rose’s house in Camden, north London, they found a box marked ‘Tamara’ which had a letter he had once sent to Mr Ecclestone along with holiday photos and press cuttings about his previous flame.

When asked why he kept them, he answered:

That’s my mum. Every time Tamara’s in the papers or on the news she feels the need to bring them round.

I kept them so I had a story. If I ever showed it back to my grandkids I can say I used to go out with Tamara Ecclestone.

Rose, whose name was Jonathan Ketterman at the time he dated Ecclestone, also sold a ‘kiss-and-tell’ story to the Mail on Sunday to get back at her for cheating on him.

They were very clever and asked me questions about Bernie as well as Tamara, about Bernie getting beat up in a car once when we went to the cinema. In fact the story ended up being about Bernie rather than Tamara.

It made me look stupid and I’ve regretted it ever since. Obviously the £10,000 I got was nothing.

Rose, who has a 13-year-old son and changed his name from Jonathan Ketterman to Derek Rose in August 2011, sold a vivid story about Ecclestone’s private life to the Mail on Sunday for £10,000, printed on August 21, 2002.

He said he had been left ‘heartbroken, upset and destroyed’ after he discovered she had cheated on him.

Jurors are still considering a decision on Coventry University media studies student Jakir Uddin, 20, who is accused of helping Rose with the plot.

When we broke up I was quite bitter and I wanted to get back at her for breaking my heart at the time.

I think I might have got a bit racial at one stage about the guy I believe she was cheating on me with so I faxed it to Bernie and to her, but I never heard anything back.

Giving evidence Uddin told jurors he had looked up to Rose, who was more than 12 years younger.

Uddin said Rose had helped with the lifestyle magazine he had started with a friend when studying at Coventry University.

The older man had introduced him to celebrities and given him guidance drawn from his own knowledge in working in the media industry, Uddin told the court.

I regarded him as someone with a high status in the media.

Uddin told jurors he had filmed Rose talking about his connection with the first daughter of Formula One boss Bernie Ecclestone for a university project.

But Uddin said that when it was rejected by his tutor, Rose suggested to him that they offered it to the newspapers.

I saw it as a sort of favour for Mr Rose.

Both men charge each other over the plan.