Johnny Depp was left “Heard” broken when his Rum Diaries co-star left him for a fashion model, not a male model but a a **** French female model by the name of Marie De Villepin. 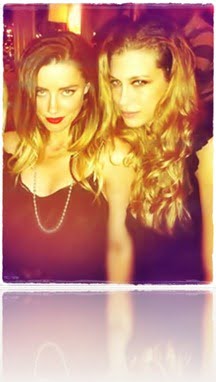 26-year-old Amber Heard a bisexual actress who was linked to Depp after they starred in the Rum Diaries previously dated photographer Tasya Van Ree, with whom she allegedly cheated on Johnny according to the NY Post. Amber and Tasya were hooking up while Amber was seeing Johnny, so I wouldn’t be surprised if they were still in contact,” a source tells Page Six. “And I think Tasya would take her back in a second. Whathappens, they’ll always beever in each other’s lives.” According to the Daily Mail Marie and Amber made their Red Carpet debut as a couple at the Oscars on Sunday night but the pretty blond by Amber’s side didn’t look like Marie to me. Amber and Marie were introduce last October by Amber’s former flame Tasya. De Villepin graduated from Pantheon Assas Paris II in 2006 with a license degree in law, but Marie was born to shine, when she was a little girl she 13 she starred in Danièle Thompson directorial debut La bûche and,  three years ago she had a small part in Quentin Tarantino’s Inglorious Barters but her pat was cut at the end of the editing, 8 years ago she starred in Les Rois Maudits  the French tv mini series as Phlippa Of Hainault. He leading role as an actress came on November 2010 when she  starred in Veit Helmer’s film Baikonur. Talented Marie who is also the lead singer in the music band Pinkmist, began her career as a model in 2004 under the alias Marie Steiss when she appeared as the bride in fashion designer Franck Sorbier’s Fall 2004 Haute Couture collection, and  posed for Gilles Bensimon for the 2005 October issue of ELLE Magazine. The following year she was  the face for Givenchy’s perfume Ange ou Démon, she has been on the runway for United Bamboo, Diane Von Furstenberg, Givenchy, Malandrino, Nicole Romano, Christopher Kane and Krizia among others. Marie’s measurements are hips 35, waist 24 and bust 33’.