Annalise Mishler is a beautiful social media influencer and as far as we know, the girlfriend of reality TV contestant, Chad Johnson.

Annalise’s beau is best known from his stints on The Bachelorette and Bachelor in Paradise. He is currently facing domestic abuse allegations following a drunken rage over the weekend.
According to Annalise Chad left a hole in her apartment wall and also yelled at her from the other side of a locked door.
The couple has been dating for a while now, however, Mishler noted that she had taken back a key to her place from Johnson.

Annalise Mishler who also goes by Annie Mishler, was born September 24, 1994; the California native is one of six children.
Annalise made heads turn when she underwent an amazing body transformation. Annalise Mishler who suffered from an eating disorder for years documented her journey which saw her going from 60 lbs to 110 lbs at 5’6″ between 2015 and 2016. 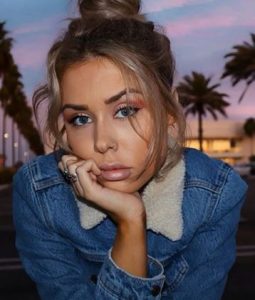 She has since earned over 80k followers on Instagram alone and has used her platform to offers life and fitness coaching. In addition she aims to help people struggling with mental health. She is currently signed to IEG Model agency.

She also has her own Patreon account where people can pay a monthly fee to get exclusive content from the petite blonde. On her page she writes ‘If you’re here, you have access to my podcast, exclusive videos, private snapchat, and more!’
Annalise Mishler also goes onto reveal she began her Patreon account in 2017, she writes ‘I started this Patreon in July 2017 when I realized that 90% of my Youtube videos were wrongfully demonetized, but it since has turned into something that is cathartic, therapeutic and fun for me. I love connecting with you guys on a personal level and being able to talk openly about whatever I want!!’

Annalise Mishler also has a YouTube channel which she calls her ‘nonsense channel’ and has over 30k subscribers. On her channel she posts from comedy to vlogs where Chad has also made a couple of appearances. She began her channel in 2015.