Suzanne Mubarak is a former First Lady of Egypt and the long time wife of politician and former president, Hosni Mubarak.

Suzanne’s husband spent three decades in office before a popular uprising swept Egypt. Reports say the former president has died at the age of 91.

Born in 1928, Mubarak entered the air force as a teenager and went on to play a key role in the 1973 Arab-Israeli war. He became president less than a decade later, following the assassination of President Anwar Sadat, and played a key role in the Israel-Palestinian peace process.
Mubarak who was convicted of the killing of protesters was set free in 2017. He is survived by his wife of over six decades, Suzanne, their children and grandchildren.

Suzanne Mubarak was Egypt’s firs lady from October 1981 till February 2011. 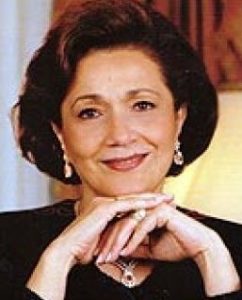 Suzanne was born in The River Nile on February 28th 1941 -as Suzanne Thabet the daughter of an Egyptian pediatrician named Saleh Thabet and a British mother Lily May Palmer who was a nurse.

Suzanne attended St. Claire Heliopolis in Cairo during high school years. She graduated from American University in Cairo, where she obtained a political science degree. In addition, she holds a masters degree in sociology. A sociologist by profession, she centered her work as a First lady in charity, social programs and and overall concern for social welfare. She was a leader for the Egyptian U.N. delegation in conferences relating to women and children.
For her efforts on on human trafficking and family affairs she was nominated as a Good will Ambassador for the United Nations in 2008.

Mrs. Mubarak is the honorary president of Rotary Clubs of Egypt, She received the Paul Harris fellowship several times.

Suzanne Thabet became Suzanne Mubarak at the tender age of 17, at the time she had to put her studies on hold to become a spouse and mother. She eventually went back to school and earned her education.
She and Hosni have two grown children; she is the mother of Alaa Mubarak who is a 59-year-old businessman and Gamal Mubarak who is a 56-year-old politician for the National Democratic party.

Through her sons, Suzanne Mubarak is a proud grandmother to two grandsons and a granddaughter. One o her grandsons, Muhammad Mubarak died at 12-years-old in 2009.