Guyala Bayles is the lovely sister of Australian boy, Quaden Bayles -who became a viral sensation for a heartbreaking bullying video posted by their mother.

Guyala’s brother received support from people worldwide — including celebrities after his mother shared a video oh the nine-year-old in which he expresses his desire to die following a day of bullying at school last week. The video which garnered millions of views and the sympathy from people all over, has since disappeared.

This was not the first time for Quaden or his mother, Yarraka Bayles on the camera. Due to his condition, called achondroplasia dwarfism -he and his mother have appeared on Television speaking about it to raise awareness.
In addition to Quaden, Yakarra is also the mother of Cecileigh, Guyala and Lili.

Guyala Bayles hails from Brisbane, Australia, and is of aboriginal Australian descent. Her little brother hasn’t only faced discrimination due to having dwarfism, but because of his aboriginal ancestry.
Ironically, Guyala Bayles is the exact opposite of her much younger brother, she happens to be a fashion model and an Aboriginal advocate. 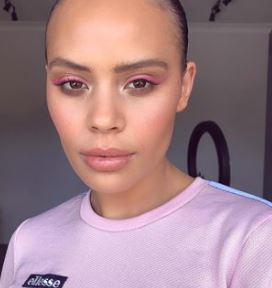 According to her social media, Guyala Bayles who goes by Lala, is signed to Chic Management. She describes herself as an ‘Aboriginal Model and Poet’ -and has gained over 12k followers on her Instagram profile.
However, things haven’t been exactly easy for the 20-year-old stunner. She, like Quaden was discriminated for her Aboriginal origin in the past and had to fight the industry to get where she is now. At one point, she was even advised to not mention her indigenous heritage.
Something that would never happens as she comes from a long line of activism in her family. Her great-grandmother was ‘Aunty Maureen’ Watson and grandfather Tiga Bayles – both prominent indigenous rights campaigners.
As a model she’s walked the runaway for a number of brands and most recently she worked on a campaign for Maybelline cosmetics for Chemist Warehouse.

In her native country, Guayala has a long history of campaigning for Aboriginal issues and is a known anti-Australia Day activist. At 17, she took part in Brisbane’s Invasion Day march in 2016, saying she wanted white Australians to realise they lived in a ‘stolen county’.