Jennyfer Morin was once in a relationship with Robert Hyde -a Connecticut congressional candidate who has been implicated in the Ukraine scandal.

However, ex-girlfriend and baby mama -Jennyfer Morin is coming forward revealing Hyde owed her over two grand in child support all the while he was donating thousands to President Donald Trump.
During the ex’s relationship they welcomed a son who is now 13-years-old. In court docs which are being shared by Jennyfer it says that Hyde has donated more than $56,000 to political campaigns since October 2016.
However when he was ordered by a judge in 2018 to pay $300 a week in child support, he said he couldn’t afford it.
Hyde is a former landscaper with a public relations company.
The 40-year-old also made headlines last December after making sexist comments about Senator, Kamala Harris. Mostn recently, Text messages show Hyde was involved in efforts to surveil and remove former US Ambassador Marie Yovanovitch from her post in Kiev. 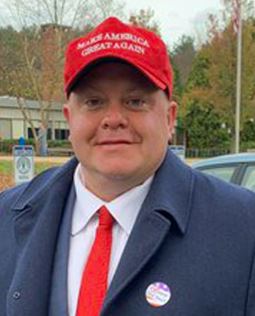 Jennyfer who has been dealing with Hyde about child support for years, also revealed that Hyde has had sporadic contact with his son, ans she is appalled at the though people could vote for him. “I’m shocked that people are planning to vote for this man,” she said in an interview.

Jennyfer Morin who also goes by Jennyfer Lee Morin and resides in Torrington, CT; was born November 11, 1983. The 36-year-old mom of one drives a school bus for a living. She previously worked in the repair services industry as the Principal at Clutter Bug Cleaning CO.