Beatriz Gutiérrez Müller is the first lady of Mexico, that means she is the wife of Andrés Manuel López Obrador -who serves as the country’s president.

Beatriz’s husband is being highly criticized over his handling of the pandemic crisis affecting the entire world. The 66-year-old popularly known as AMLO has been labeled the most irresponsible president on the Continent, even more than Donald Trump and that right there, is a whole lot to say.

The first lady of Mexico has also talked about the health crisis saying on her official Twitter account not to believe in fake news and told her followers to trust in official sources only.

Beatriz Gutiérrez describes herself on Twitter as a mother, wife, writer and college professor. Since the beginning of her husband’s presidency, Beatriz Gutiérrez Müller announced that she planned to continue teaching and working on cultural affairs.
Beatriz Gutiérrez Müller was born January 13, 1969; in Mexico City. She is a writer and researcher by profession.
She is the daughter of Nora Beatriz Müller Bentjerodt of Chilean origin and German descent, and Juan Gutiérrez Canet, a business administrator.
She spent her childhood, adolescence and youth in Puebla, where she studied Communication in the Iberoamerican University and also obtained her Master in Iberoamerican Literature. 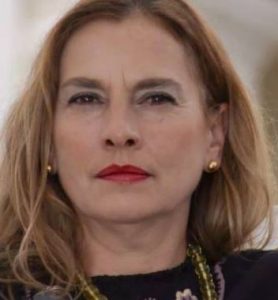 She later completed a doctorate in Literary Theory from the Autonomous Metropolitan University (UAM). She has published several books: Long life in the sun, Legends and songs, Manuscript of secrets, Philip or Giordano Bruno, History of a council and other tales, and A day at night.

Not only that, through her social platforms she shares poems and chronicles that she has written throughout her career.
She was a journalist for several years and worked in different media outlets, including El Universal de Puebla, Nexos and Argos Comunicación, the producer of Epigmenio Ibarra.

In 2001 Beatriz Gutiérrez Müller, she served as an advisor to the Broadcasting Directorate of the city government and thanks to her performance she became an advisor for International affairs.
She and AMLO have been married since 2006. Together they share one son, Jesus Ernesto.

AMLO was previously married to Rocío Beltrán Medina from 1979 until her death in 2003.