Barkha Cardoz is the wife of world-renowned chef Floyd Cardoz -who is said to have died due to complications from the coronavirus also known as COVID-19.

Barkha’s husband revealed on an Instagram post that he had returned to New York on March 8th via Frankfurt. He felt feverish and admitted himself into a NY hospital about a week ago. He was 59.

Floyd Cardoz attended culinary school in his native Mumbai, India, and then The Global Hospitality Management School at Les Roches in Switzerland to broaden his knowledge of international cuisines.
He moved to New York City in 1988 and, four years later, started working under Chef Gray Kunz at Lespinasse, where he worked his way from chef de partie to executive sous chef.
He then joined Union Square Hospitality Group in the late 90’s, opening Indian restaurant Tabla -a groundbreaking, fine-dining restaurant. He also opened El Verano Taquería and North End Grill.

Floyd received the “Humanitarian Award of the Year Award” from Share Our Strength in 2007.
In 2011 he was named among the “Top 50 Most Influential Global Indians” by GQ Magazine. In summer 2012, Cardoz won season 3 of Bravo’s “Top Chef Masters.”
In 2014, he left North End Grill to open White Street. In 2015, he opened his first restaurant in Mumbai, The Bombay Canteen. The following summer he opened Paowalla in New York’s Soho neighborhood -which resurfaced in 2018 as Bombay Bread Bar. 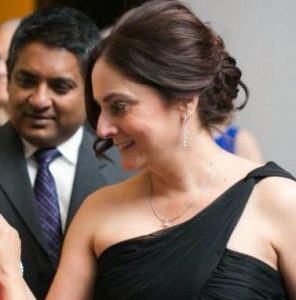 The chef was the author of two cookbooks: “One Spice, Two Spice: American Food, Indian Flavors” and “Floyd Cardoz: Flavorwalla: Big Flavor. Bold Spices. A New Way to Cook the Foods You Love.”

Cardoz is survived by his mother Beryl, wife Barkha and their two children.

Barkha Cardoz and her husband had been married for decades. She was also born and raised in India. According to her social media, the spouse and mother went to Canossa Convent High School, in Mumbai and also attended St. Joseph’s Convent, Bhopal.
She later studied at Institute of Hotel Management where she majored in Catering Technology and Applied Nutrition, also in Mumbai.