Lil Reese, the Chicago rapper whom you know for song such as ‘Us’ ‘Nobody Knows’ ‘Ain’t Witchu 4sho’ and ‘I Need That’ -is said to be in critical condition after being shot.

Lil Resse born Tavares Taylor on January 6, 1993; first became known for his collaborations with Chief Keef and Fredo Santana. Reese who has been active since the early 2010’s was featured on Keef’s single ‘I Don’t Like’ which peaked at #15 on the Hot Rap Songs chart. Lil Reese also recorded a remix of his song “Us” with Rick Ross and Drake.

Reese grew up in Chicago and dropped out of high school halfway through to pursue his music career. He then traveled to Southern California for his music.
In 2012, he released his debut mixtape, Don’t Like. Since then he’s released at least six more mixtapes. His second mix tape, Supa Savage, was released in 2013.
He is currently signed to the major record label Def Jam and Glory Boys Entertainment. 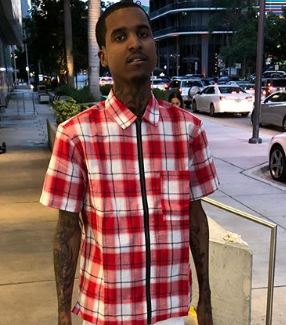 Reports say the 26-year-old was shot in the neck Monday afternoon at an intersection in Country Club Hills, a Chicago suburb. He was taken to the hospital before police arrived and has since been transferred to Advocate Christ Medical Center in Oak Lawn, Illinois.

Reese who seems close to his family and is the father of one daughter named, Aubri; revealed earlier this year he lost his grandmother with a tribute post that he captioned

It appears however, the young rapper is currently single as no lady love is featured on his social media where he has over 1 million followers.
Since the shooting, no arrests have been reported and the police investigation is ongoing.