Melanie Coleman was a college gymnast who tragically lost her life during a training exercise. She was 20-years-old.

Melanie a student athlete at Southern Connecticut State University died over the weekend following an accident at practice two days earlier.
According to reports, the all-state gymnast was practicing on the bars Friday at the SCSU facilities and suffered a spinal cord injury.

Melanie was key in taking her high school team to a runner-up finish at the state competition. She was named all-state, team MVP and team captain during her high school career at Jonathan Law High School.
She joined SCSU in 2017 as a freshman. Melanie Coleman was a Level 10 gymnast, the highest level in the gymnastics Junior Olympics Program. The junior beam specialist was a nursing major and named an All-America Scholar Athlete by USA Gymnastics.
In addition she volunteered as a youth instructor at New Era Gymnastics in Hamden. 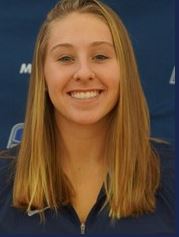 Melanie Coleman, orignally from Milford, Conn; is survived by her mother, Susan Coleman and four siblings including older sister, Tiffany who is also a gymnast. The sisters competed together until Tiffany’s graduation last year. They were both profiled in the Southern News in an article that highlights Southern Connecticut student-athletes that compete with their siblings.

From her social media we can tell the lovely and talented blonde loved hanging out with her girlfriends and trips to the beach as she was also a keen surfer.
She was also close to her sister, Tiffany, who graduated from SCSU this May.