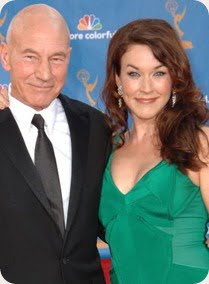 Magneto is marrying Professor X?? Don’t get me wrong, former X-Men co-star Ian McKellan, recently announced on the British TV show “The Jonathan Ross Program” that he will be officiating at his longtime friend Stewart’s wedding.

“I’m going to marry Patrick,” the actor said at first, but then added, “I am going to officiate at his wedding.”

72 year old Patrick Stewart’s fiancee, Sunny Ozell, is 35 years old, she is more than three decades the actor’s junior. The couple have been together for four years. Sunny lives in New York but grew up in Nevada. Patrick met Sunny in 2008 when he was performing in a production of “Macbeth” at the Brooklyn Academy of Music.

Sunny Ozell is a singer and songwriter. A regular at Lower East Side music halls such as Rockwood and the Living Room for the past half-decade, Ozell has collaborated with guitarist Jim Campilongo, former Norah Jones band member Adam Levy, and singer-songwriter Krystal Warren.

Sunny went from being lead singer in Colorado-based pan-Latin party band Chupacabra to solo performer on the Manhattan singer-songwriter scene. Though she spent much of her childhood ski-racing, Ozell’s passion for singing has been a constant, driving force in her life, according to her website.

Stewart has been previously married to Sheila Falconer, from 1966 to 1990, and to Wendy Neuss, from 2000 to 2003. He was also romantically involved with actress Lisa Dillion from 2003 to 2007. Stewart has two children with his first wife: Daniel Stewart and Sophie Alexandra.

His son Daniel is a television actor, and has appeared alongside his father in the 1993 film Death Train, and in the 1992 Star Trek episode “The Inner Light” in which he played Stewart’s son.