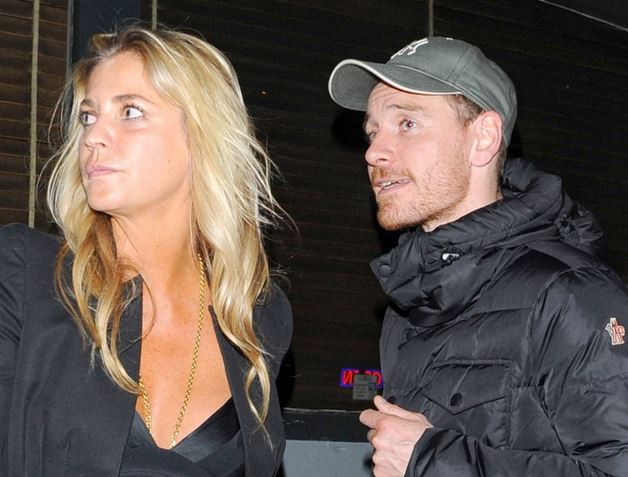 The German-Irish mix actor or Magneto if you prefer was spotted doing what single 35 year old man do best!!! Partying!

The actor was seen last night leaving the Groucho club in Soho in London but guess what! He was not alone, as he walked out on the street he was spotted getting cozy with perhaps his new leading lady??

We don’t know for sure but fact is that he is one of Hollywood’s hottest bachelors and is nothing weird to see him accompanied by a hot and beautiful woman.

Dressed in a padded jacket and beige jeans, the 35-year-old chatted with the blonde on the pavement outside the club. But when he was spotted by movie fans, the actor made a quick exit on his own

Although not famous blonde gal, we’ll call her that for obvious reasons; is not exactly his usual target.

So what do you think happened; was he only too drunk and though oh she is good looking enough or an old friend…? Well I’ll say yes to the drunk part and a maybe to a possible familiar face…she could be his agent for all we know! With the way he was dressed I don’t think he was aiming for a good impression after all! But then again if we take a closer look at the pictures he got very flirty and giggly with blondie! She on the other side was looking very stylish and in a tight black suit with a plunging neckline and red heals!

Fassbender being the heartthrob that he is, is obviously wasting no time after having ended his former relationship to co-star Nicole Beharie only a few weeks ago!

But blondie was seen getting a little uncomfortable getting closer to the star wonder if they had a chance to exchange numbers at least?? I think they make a good couple right! They seem about the same age and didn’t seem to mind the actors charming attitude or the flashes of the paparazzi! And she does put on some nice pictures! Don’t you think!

Michael was raised in the town of Killarney, Co. Kerry, in south west Ireland. At the moment he is based in London and as we can see very comfy there, did you know the actors first love was music!

In 2003, he appeared in the music video “Blind Pilots” by British rock band, ‘The Cooper Temple Clause’.

I really wanted to be a guitarist – I wanted to be a lead guitarist. But I wasn’t good enough. And it’s always hard to find a drummer, especially in small towns. Or a bass player. So it was just me and this other guy Mike – the two Mikes – and we tried to put on a gig one time in this pub at lunchtime, playing Metallica. It didn’t go off too well. They kept turning the volume down, so it was like Unplugged, but with electric guitars. That was the one and only gig I ever played.

Luckily for fans there is always movies! Seen the latest Prometheus?