Rick Cotton a prominent U.S. official, is said to have tested positive for the deadly Coronavirus.

According to numerous reports, Cotton who serves as the head at Port Authority of New York & New Jersey, was diagnosed with COVID-19. He had been visiting local airports over the past weeks, precisicely to oversee coronavirus-screening procedures. New York’s governor, Andrew Cuomo announced Cotton will be working from home.

Rick Cotton born Richard Cotton, attended Harvard College for his A.B. and obtained a J.D. from Yale. After Law School he served as a law clerk to Justice William J. Brennan, Jr. on the U.S. Supreme Court.
He worked at NBC Universal for 25 years first joining in 1989 and where he held a number of positions including 20 years as EVP and General Counsel and four years in London as President and Managing Director of CNBC Europe.
He also worked at the U.S. Department of Health, Education and Welfare and at the U.S. Department of Energy. 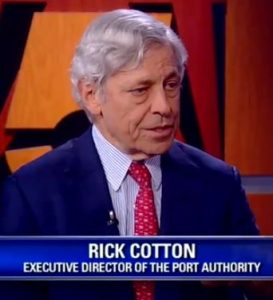 He became the Executive Director of The Port Authority on August 2017, having first joined in 2015. He previously served as Cuomo’s Special Counsellor for Interagency Initiatives.
The Port Authority is overseen by the governors of both states. Cotton manages the region’s major airports, including JFK, LaGuardia, and Newark Liberty International Airport, as well as several commuter systems, the World Trade Center, seaports, and other infrastructure.

Rick Cotton is married to Elizabeth Weinberg Smith who is his second wife. They tied the knot in May 7, 2011. Elizabeth Weinberg Smith aka Betsy, is the President and CEO of the Central Park Conservancy, charged with overseeing strategic planning, park operations, and public programming for Central Park.
His wife was previously an assistant commissioner with the New York City Department of Parks and Recreation.