Shelby Bryan, the husband of Vogue’s woman boss, Anna Wintour is no more! According to reports, the veteran editor and her partner of more than 20-years have joined the list of marriages to fall apart in 2020.

Apparently the couple ‘cooled off’ a while ago and are now making it official. Other reports say the reason for the split is Wintour’s lack of interest in her longtime husband as the Daily Mail writes, that a friend of Anna revealed that Vogue, ‘takes precedence over all.’ 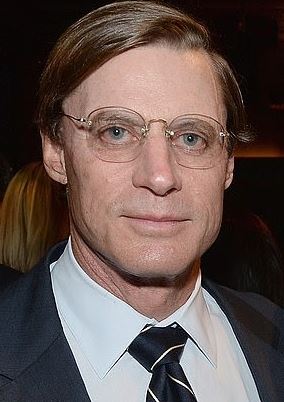 Wintour and Shelby Bryan first got together in 1999, at the time the two instantly hit it off which resulted in a steamy affair. At the time, they were both still married however scandal broke and they both ended their respective relationships to finally and officially become husband and wife in 2004. It was Anna’s second wedding and Shelby’s third.
Get to know more about Shelby Bryan below.

Anna Wintour is a true example of female domination. The British born has enjoyed success for years as one of the most powerful people in the magazine industry. She has been the editor in chief of the United States edition of Vogue since 1988, the artistic director of Vogue’s parent, Condé Nast, since 2013, and the company’s global content adviser since 2019.
Most recently, it’s been reported that at 71, Wintour has become even more powerful as she’s been named, chief content officer and global editorial director of Vogue.

Shelby Bryan is a businessman and investor who was born in Texas on March 21, 1946.

74-year-old Shelby Bryan has enjoyed a successful career in the world of business. He holds an MBA from Harvard Business School.

He began his career in the field at Morgan Stanley in the 1970s, later starting his own cellular company in NYC called Millicom in 1980. From there, he moved to ICG and Pingtone.
Shelby Bryan is also a lifelong democrat who has given hundreds of thousands to the Democratic party and its candidates since the mid 90’s.
Shelby served as the National Finance Chair for the Democratic Senatorial Campaign Committee from 1997 to 1998. He also served on the President’s Foreign Intelligence Advisory Board from 1999 to 2001. In the 2000 election, he supported friends Al Gore, for president, and Hillary Clinton for New York senator, according to Texas Monthly.

In addition, Bryan is a financial contributor to the New York Metropolitan Opera, the Houston Fine Arts Museum, and the Houston Grand Opera. 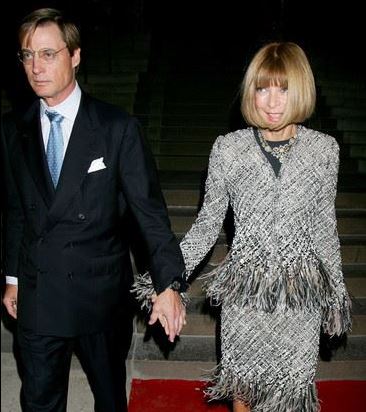 Prior to Wintour, Shelby Bryan was married two previous times. His first marriage was to Lucia Bryan. The two were married back in the 70’s. From that union he is the father to two daughters; Ashley and Alexis.

In 1984 he and second wife, Katherine Bryan tied the knot. From his second marriage he is the father of two sons, Austin and Jack Bryan. His second marriage collapsed following his affair with Wintour, who became his third wife in 2004.

Katherine Bee Shaffer is the name of the only daughter of Anna Wintour and ex-husband David Shaffer. 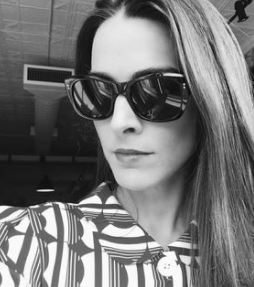 It is safe to say Katherine is a blessed gal; through her mother she’s had access to the hottest fashion shops, connection to the top designers, models and celebrities. In addition she gets to wear just about any famous designer brand she wants. But Shaffer isn’t just a lucky gal, she has the looks and the brain to go along. She is the whole package.

Katherine Eleanor Shaffer was born in London on 31, 1987. Katherine Shaffer also known as Bee Shaffer, was born to parents Anna Wintour and ex-husband child psychiatrist, Dr. David Shaffer. Her parents were married for 15, years; time during which they also welcomed Bee’s older brother, Charles Shaffer. Bee was 12-years-old when her parents divorced.

The relationship between Anna’s children and Shelby Bryan isn’t clear. 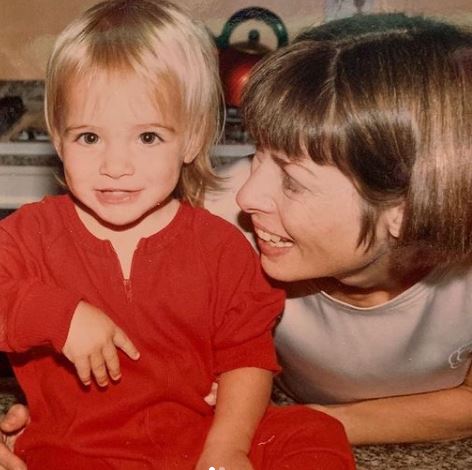 Katherine Shaffer who is mostly known by her nickname Bee, made the across the pond when her family relocated to New York. At the time, her dad worked at at children’s hospital and her mom landed her job at Vogue, for which she is famously known.

In New York Bee attended the Spence School and then went on to Columbia University where she received her B.A. in History in 2009. Her fist job was at Teen Vogue as a contributor editor at the age of 17.
While in college Bee interned at he Weinstein Company and The Manhattan Theater Club. She also interned at New York Magazine.
Bee Shaffer worked for the Daily Telegraph from 2005 to 2006, where she wrote the column, The New York Notebook.

In 2009, Bee Shaffer began working as an assistant for the Ricky Van Veen College Humor website co-founder, where Bee met her ex-boyfriend Jake Hurwitz, a comedy writer. In 2011 Bee spread her wings began to work for Glee’s creator Ryan Murphy, relocating to California.

Bee and Jake took separate ways after dating for two years. She later moved back to New York where she landed a job as a segment producer for Seth Meyers on his new NBC’s Late Night show.
In 2018, she became a married woman following her nuptials to Italian director, Francesco Carrozzini. Nowadays she goes by, Bee Carrozzini.

You can find the stunner who is active on social media, on Instagram here. 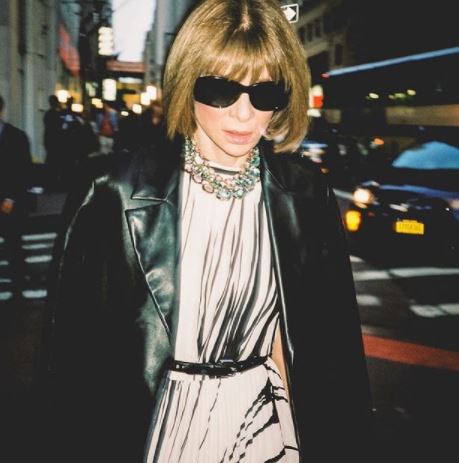 In the world of vogue, Anna Wintour has surely become someone you just simply have to listen, because of what she embodies.
She’s been hailed as a fashion and media icon and described as a visionary and creative leader for decades.

That said, when it comes to her personal style, there’s one thing that she cannot miss and that’s her signature sunglasses. She’s been seen and photographed sporting her heavy black frames to most runway shows and important events.

Why Does Anna Wintour Wear Sunglasses?

Wintour who hardly ever takes her iconic heavy black sunglasses off, explained during an interview, the reason of wearing them 24/7.
She said during an interview with CNN that the reason she wears them all the time is to avoid people from knowing what she’s thinking about. She also added, “They help me when I’m feeling a bit tired or sleepy.”

Back in 2009, she was asked about the emblematic accessory, to what she replied “They are seriously useful. I can sit in a show and if I am bored out of my mind, nobody will notice … At this point, they have become, really, armor.”

There has been times however, when the sunglasses have had come off; like back in 2017, when she was made a Dame by the Queen. 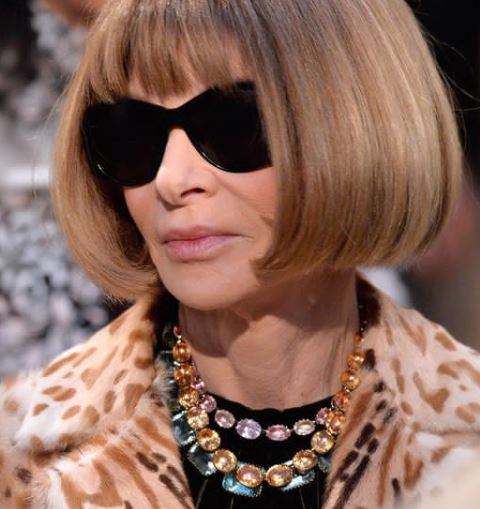 Wintour who is a fashion reference and in addition to her famous sunnies, has also been known for wearing repetitive pieces which include mules, boots, printed dresses and a particular necklace which it seems she couldn’t get enough of back in 2018.

At the time, she heavily photographed wearing a lilac-stoned necklace which she took everywhere. According to a report from Grazia, Wintour found her beloved necklace at British jewelers S.J. Phillips Ltd.
She apparently dropped $20k for the piece which is made from Georgian crystals. 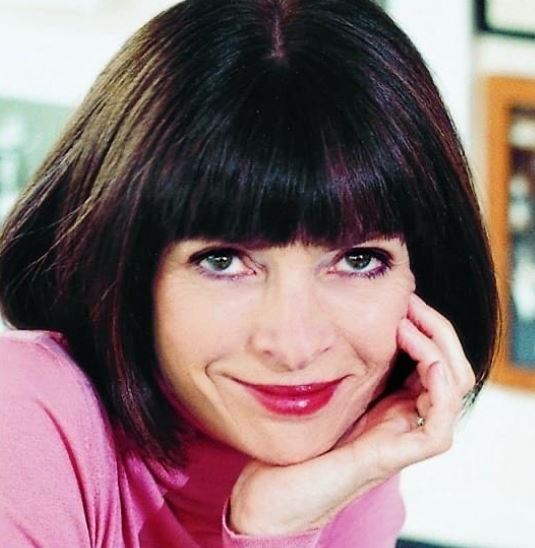 Wintour is equally known for her signature and perfect-looking bob, inspiring other women to want to give the hairstyle a try.
The unfalteringly stylish Wintour, has kept her bob for decades which has made people wonder as to why she has kept it for so long.
Wintour who spoke about the matter a few years ago gave a the most unexpected response ever, admitting she is simply too lazy to change it up.
When last year, she was asked by Rihanna about it, she revealed the one time she tried to get a makeover for her hair, it was a complete disaster. She elaborated saying she had to wear a hat for months to cover it up. She added ‘I’m way too anxious and too lazy to try it again.’
During the same interview she went onto say she didn’t remember exactly how long she’s had the same haircut for. 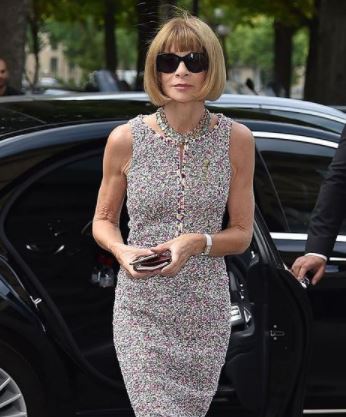 Wintour has kept an enviable figure since forever, sparking many to inquire about her diet. How does she stay fit and keeps her slim figure you ask?

Anna Wintour is known to switch off her phone when eating lunch. Personal assistants confirm that Anna Wintour’s diet is majorly protein based, and the veteran chief editor makes sure that she consumes steak daily.
Her diet secrets are part of a disciplined lifestyle which includes waking up at 5am and practicing her sport of choice which is known to be tennis.
She then sticks to a simple diet which is protein-rich and which she follows religiously. 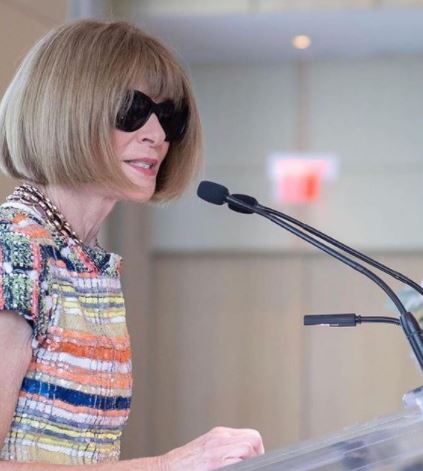 Shelby Bryan’s ex is a successful woman to say the least, therefore she’s an inspiration to many. Through the years she has shared some of her wisdom. Some of her most powerful and inspirational quotes on success include

“We have to reflect the world that we live in. It is so important for designers not to run scared, and not to be too worried about what’s safe and what’s commercial.”

“Everyone should get sacked at least once. It forces you to look at yourself. It is important to have setbacks because that is the reality of life. Perfection doesn’t exist.”

“I think it’s very important for children to understand that women work and that it’s fulfilling, and it doesn’t mean that they love you any less or care about you any less.”

“Vogue is the best of everything that fashion can offer.”

“Fashion is ceaselessly fascinating because it is an expression of self.”

“I learned how important it is to lead and be decisive and to, in a way, empower other people to do their best.”

“Create your own style… let it be unique for yourself and yet identifiable for others.”