Claudia’s boyfriend is reportedly saying goodbye to his nationally syndicated The Tom Joyner Morning Show. The 70-year-old who is celebrating the show’s 25th anniversary recently announced his retirement.
The Tuskegee, Alabama native earned the nickname The Fly Jock and The Hardest Working Man in Radio by working long hours and flying between his morning job (in Dallas, Texas) and afternoon job (in Chicago, Illinois) every weekday for eight years.

He is known for being the first African-American man to be inducted into the National Radio Hall of Fame in 1998. Joyner also won the Best DJ of the Year Award from Impact magazine so many times that it was renamed the Tom Joyner Award. In 2004, he was the recipient of the NAB Marconi Radio Award. Earlier this year, he was honored with the Vanguard Award at the 50th NAACP Image Awards.

Tom Joyner was married to Donna Richardson, an ESPN sports commentator, in the year 2000, on the Montego Beach Bay Jamaica. The couple was married for about 12 years before their divorce. Although the previously married couple did not produce any children, Tom already has two sons from his previous marriage with first wife Dora; Thomas Jr and Oscar.
Prior to Claudia Jordan, Tom was romantically linked to Real Housewife of Atlanta star, Porsha Williams. Soon after, he and Claudia Jordan were reportedly dating. 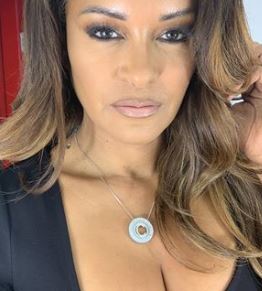 Claudia Jordan is the same Claudia Jordan who appeared on a number of reality shows including, Celebrity Apprentice and The Real Housewives of Atlanta.
Born Claudia Angela Jordan on April 12, 1973; the Rhode Island native has made a name for herself as a model, actress and TV & radio personality. She began her television career as a model on Deal or No Deal and was also crowned Miss Teen USA in 1990.

She joined The Real Housewives of Atlanta in 2014 and The Next :15 in 2016. The 46-year-old is currently the Host of-Out Loud w/Claudia Jordan on #FoxSoul. She was previously a co-host on The Rickey Smiley Morning Show and a frequent contributor on HLN’s Dr. Drew On Call.

Claudia Jordan was briefly married to Datari Turner in 2009, but their marriage was later annulled. Thoughts on Claudia and Tom dating?