Christine Harrell is the lovely wife of film and TV actor, Sean Astin -whom you may recognize from his role in the iconic Lord of the Rings.

Christine’s husband is known for his portrayal of Samwise Gamgee in the Lord of the Rings trilogy. He also played Mikey Walsh in The Goonies and played the titular character in Rudy.

Born in Santa Monica on February 25, 1971; Sean landed a role as a child in The Goonies and graduated from UCLA with a degree in history.
A Directors Guild of America member, Astin has also directed episodes of the HBO anthology series Perversions of Science and Angel for The WB. His short film The Long and Short of It was an official entry at Sundance 2003.
Most recently, Sean can be seen on a recurring role in season two of Stranger Things and starred in Netflix’s No Good Nick. 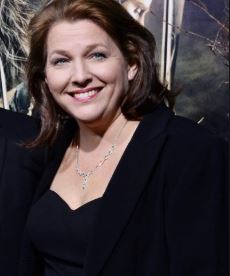 He’s been happily married to wife, Christine Harrell since 1992. Together they are the parents of three daughters, Alexandra -also an actress; Elizabeth and Isabella Astin.

Christine Harrell was born September 12, 1967. The gorgeous blonde is a former beauty queen who was crowned Miss Indiana Teen USA at age 17.
After she quit modeling she started her career in the film and television industry working at Special Artists Agency as assistant to Elizabeth Dalling, CEO, senior partner and head of international and celebrity representation.
Christine graduated from UCLA with a B.A. in History & a B.A. in English American Literature and Culture.
In addition to being Sean’s wife, she is known for her work as an Academy Award nominated producer. The couple co-produced a short film together, Kangaroo Court. She currently serves as as Vice President and CFO of Lava Entertainment.