Meet Luis Segura, who has been identified as the very first boyfriend of none other then actress turned royal -Meghan Markle.

People say pictures speaks louder than words, an image of a then teen Meghan and her alleged first boyfriend, Luis Segura has been making the rounds on social media.

It is known to everyone that Meghan Markle had a very normal life before marrying Prince Harry and thus becoming Duchess of Sussex. As proof of this, a user on Instagram with the name ‘Velvetcoke’ posted a photo that shows one of the special moments in the life of the former actress.
In the shared photo, Meghan is seen in the company of who was her first boyfriend, a boy named Luis Segura, in what was probably her prom. The photo was taken to remember a high school Christmas dance in 1997. 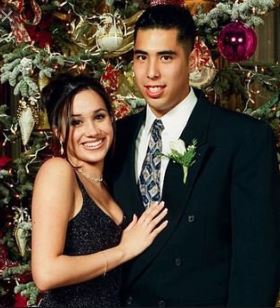 The now viral photo has provoked a series of comments on social networks, not only because of the admiration caused by the beauty of the Duchess, for whom the years do not seem to have passed, but also there’s been a curiosity for the person who accompanies her.
At the time, Meghan, was attending Immaculate Heart High School; and can be seen cosying up to then-boyfriend Luis Segura.
Luis, who attended St. Francis High School; has been described in the past as Meghan’s first long-term boyfriend. Like Meghan, he is now a married fella.

Luia Adrian Segura is a Real Estate professional. According to a profile, he is currently the director for the Sports and Entertainment Division at Compass.
He studied psychology at Coldwell Banker University and had his real estate training at Fred Sands Training Program. He previously worked as a realtor for Fred Sands, Prudential California Realty and John Aaroe Group. He began working at Compass in 2018 -with nearly 20 years as a real estate professional.
According to his social media, Luis Segura is happily married to curly haired brunette, Christina Segura. Together they are the parents of two boys.