Peter Handke & Olga Tokarczuk, have been named as the Nobel Prize winners in literature for the 2018 and 2019 installment.
Polish writer Olga Tokarczuk, won the postponed 2018 award, and Austrian author Peter Handke, has won the prize for this year -the award is considered to be the most prestigious award in the literary world. 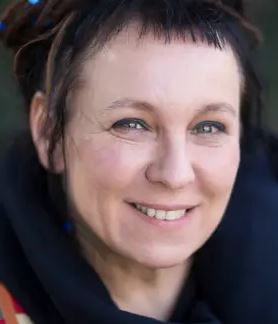 57-year-old Tokarczuk, an activist, public intellectual, and critic of Poland’s politics, who first gained popularity with her books set in the Kłodzko Valley, where she lived in a small village for many years. These seemingly modest books discussed themes around settling down and making roots in a new place. The complicated history of those lands straddled by Poland, Czechia, and Germany inspired Tokarczuk’s imagination and made her writing evolve towards mythological tales, allowing her to capture something of the strangeness of existence.

She became the first Polish writer to win the Man Booker International prize, which goes to the best work of translated fiction from anywhere in the world in 2018. She is only the 15th woman to win the Nobel Literature Prize.
Born January 29, 1962; Olga has published more than a dozen works since her debut in 1993. She is the author of nine novels and several collections of short stories and essays.
A public intellectual, activist and vocal critic of Poland’s increasingly rightwing politics, Tokarczuk’s opinions have occasionally outraged some in her home country.
She is a bestseller in Poland, where she has won numerous awards and is a household name. And has become much better known in the UK since winning the 2018 Booker international prize for her sixth novel, Flights.

Olga is married to Roman Fingas and together they have one child, Zbyszko Fingas. 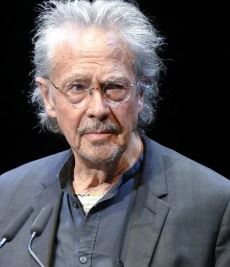 76-year-old controversial Austrian author Peter Handke is known particularly for the play Über die Dörfer (Walk About the Villages), the novel Die Wiederholung (Repetition), and the screenplay for Wim Wenders’ Wings of Desire.
His work is described as radical experiments with form — experiments like the 1960s drama Offending the Audience, in which the actors onstage spend an hour critiquing the “performance” of the spectators. He also wrote short stories, radio dramas and fiction works, perhaps the most notable of which is The Goalie’s Anxiety at the Penalty Kick.

Handke, the son of a bank clerk and who has Slovene roots on his maternal side, studied law at Graz University from 1961 to 1965 and contributed pieces to the avant-garde literary magazine manuskripte. He came to public notice as an anticonventional playwright with his first important drama, Publikumsbeschimpfung (1966; Offending the Audience).
Handke was involved in filmmaking. He cowrote screenplays for several movies directed by Wim Wenders, including Der Himmel über Berlin (1987; Wings of Desire), and he penned scripts for the film and TV adaptations of some of his books. In addition, he directed three feature films, including L’Absence (1992: The Absence), which he also wrote.
His fame was sometimes overshadowed by his politics, specifically his public support of Slobodan Milošević, the former president of Yugoslavia who died while on trial for genocide and war crimes.

In his lifetime, Handke has been married twice, first to Libgart Schwarz -with whom he fathered daughter Amina. He is currently married to actress, Sophie Semin, the couple shares one child, Léocadie Handke.

The playwright and novelist, is now living in France.