Claudine’s Hollwyood star boyfriend -well knonw for films like Boyz n the Hood, A Few Good Men, Jerry Maguire and Man of Honor -is accused of having gropped a woman while at a bar in New York City in June. A 29-year-old woman claims the actor placed his hand on her breast, squeezing it without her consent, at Magic Hour Rooftop Bar Lounge near Times Square. He was allegedly intoxicated at the time.

Gooding Jr. has so far been accused of two counts of forcible touching and sexual abuse in the third degree after the alleged groping incident. 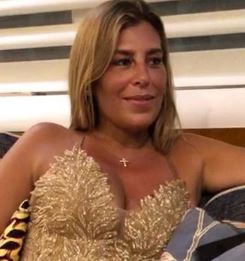 Cuba who has been separated from wife, Sara Kapfer with whom he shares three children -has been dating stunning, Claudine De Niro for months.
Claudine De Niro was born Claudine De Matos, her famous last name is because she was previously married to broker Raphael De Niro, son of Hollywood legend Robert De Niro and actress Diahnne Abbott.
She and Raphael were married for nine years prior to their divorce in 2017. During their marriage the ex’s welcomed three children, Nicholas, Alexandria and Ella Rose De Niro.

40-year-old Claudine De Niro grew up on the North Shore of Long Island and has traveled throughout the U.S., Europe, South America, and the Caribbean.
She holds a Bachelor’s degree in Advertising and Marketing Communications and an Associate’s Degree in Marketing Management.
Claudine is an entrepreneur and real estate agent, according to a profile, she is an e-Certified Associate Broker at Douglas Elliman Real Estate, specializing in Manhattan Luxury Lofts & Fine Properties.
Claudine has over 15 years of experience in high-profile marketing, public relations and event planning, she has worked with many prominent individuals, world-renowned brands and world-famous destinations.
On social media she describes herslef as a travel consultant and in addition is the co-founder of “Mostly Moms” -a Social Club for Women in Miami and Manhattan.

She and Cuba were first linked together after they were spotted in October of 2018 at celebrity hot spot Acme.