Marie Benoliel is a French YouTuber and comedian who caused major commotion at the Chanel runway show.

Benoliel decided to make an apparition during Paris Fashion Week and chose the Channel runway to make her big entrance. Benoliel who goes by Marie S’Infiltre on social media, infiltrated herself at the exclusive Chanel runway show, only to be firmly escorted off the catwalk by none other than Gigi Hadid.
As she made her way onto the Grand Palais runway at Chanel’s Spring 2020 show on Tuesday, she encounter model Gigi Hadid -who has been hailed the savior of the day after her reaction was to ****** Marie as if nothing out of the ordinary was taking place.
It is unclear if Marie Benoliel, was invited and was supposed to be part of the show or if she managed to sneak in past the tight security. 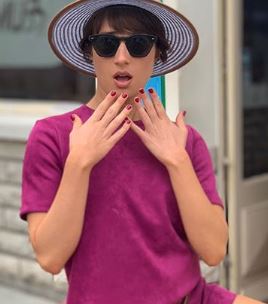 After all, this isn’t the first time Marie S’Infiltre -which can be translated to ‘Marie makes it in’ -has jumped onstage at a fashion show. She previously hopped onstage at the Etam show with Cindy Bruna clad in sparkly lingerie, which she showed off on Instagram to her 197,000 followers.

Benoliel is not a total unknown, born January 13 , 1991; she was trained at the French theater school Cours Florent.
The prominent comedian has been a guest on a number of popular French shows including Quotidien, Le gros journal and Touche pas à mon poste! She is also kind of a big deal on YouTube where she has 227,000 subscribers.
The 28-year-old has made a name for herself in France for her stunts “infiltrating” society events. She is known for her satirical style of comedy mocking French bourgeoisie. Her videos often highlight bigotry, such as a 2017 video in which she attended a campaign rally for right-wing politician Marine Le Pen.
In the video, which amassed four million views in 48 hours on Facebook, S’Infiltre spoke to supporters of the National Front political party, appearing to support their cause. However, at the end of the clip, the comedian can be seen jumping on stage and waving two middle fingers at the nationalist crowd. She has stated on interviews that her approach has never been political.

Marie is also keeping busy as she is currently performing on a one woman show on the Champs-Élysées. From her social media she appears to be good friends with fellow comedian, Adèle Galloy and appears to be in a relationship with French producer, Maxime Allouche.