Martin Rivera has been identified as the boyfriend of Amber Guyger -the female cop who fatally shot her neighbor in 2018.

Martin’s gal -now a former Dallas police officer -is accused of murdering a youg man who she wrongly believed was in her own apartment. Guyger was found guilty for the murder of Botham Jean. She was fired from the Dallas Police Department and charged by a grand jury for manslaughter.

Amber ended up killing Botham Jean, a 26-year-old accountant from the Caribbean nation of St. Lucia -after she entered Jean’s apartment believing it was her own.
Guyger was off duty but still in uniform when she shot Jean. She told investigators that after a 15-hour shift, she parked on the fourth floor of the complex’s garage — rather than the third floor, where she lived. In reality, Jean was unarmed and eating ice cream in his own apartment. 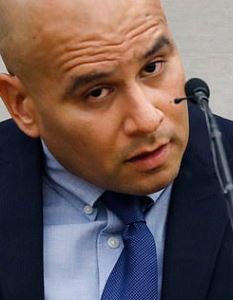 The former officer has stated she believed Jean was a burglar so she opened fire in self defense.

However, prosecutors argue that Amber was distracted at the time of the tragedy by non other than her fellow police force boyfriend, Martin Rivera. It was said in court that Amber was busy sending sexually explicit text messages to Rivera when the shooting took place.

Martin rivera who is also a Dallas police officer is said to have had an on-again, off-again sexual relationship with Guyger.
Rivera who appeared on day one of trial, was extensively questioned about a 16-minute phone conversation he had with Guyger prior to the shooting. Martin Rivera denied making plans to meet with Guyger later that same evening but acknowledged to having deleted the logs of his text exchanges with Amber.

Rivera is a 17-year DPD veteran who in 2015 was awarded Pleasant Grove Officers of The Year by the Southeast Dallas Chamber of Commerce.
In 2007 Rivera fatally shot Brandon Washington outside a Pleasant Grove convenience store, where the man was eating an allegedly stolen candy bar. A grand jury looked at the case, and Rivera was not charged with a crime. The Washington case may be reopened and local activist want Rivera fired.