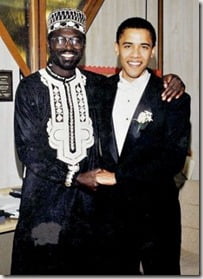 Malik Obama, also known as Abongo or Roy, is Barack Obama’s half-brother. The 55-year-old Malik is accused of beating two of his twelve wives. He is following his brother into politics, running for office in western Kenya.

“We need somebody who understands economics because we have the resources here but we just don’t have the managers,” he said. “It behooves me also to make a contribution as the first born and to do that here in Kenya, in Africa.”

Malik is standing for the position of governor of Siaya County. If he wins, he will be earning an annual salary of more than £100,000, which would take an average Kenyan 66 years to earn, and is the equivalent of £3 million in Britain, as well as a ‘retirement bonus’ of £75,000, a car, driver, VIP travel and bodyguard for life.

Allegedly, Malik is known for marrying and divorcing young local women. He is being accused of being a wife-beater and philanderer, who seduced the newest of his estimated 12 wives while she was a 17-year-old schoolgirl, a crime in a country where the legal age of consent is 18.

His wife Sheila Anyango is 35 years younger than Malik. She said that marrying him was the “worst decision” of her life and that they had “kept a secret” since she was 17. Sheila has an 18-month-old daughter by Obama called Hafifa. 20-year-old Sheila, said:

“At first he was good, after he started speaking to me at the mosque. But he has changed. Marrying him has been the biggest mistake of my life. He beats me, but mostly he’s just nasty and quarrelsome.”

“He abuses my daughter, he is a bad old man. She was a child at school. There was no negotiation with me. He made a secret plan to take her away and gave her 3,000 shillings (about £24) to get her to marry him. She’s a young girl, she was confused. I just don’t like that man.”

Sheila Anyango is not the only one of Malik’s wives to accuse him of beating them. 33-year-old Hafsa Abwanda was also married to him, but escaped after 5 years of marriage in 2008, saying he beat her and her other wives, of whom she says she saw at least 12 come and go over  the years.

Islam religion allows four wives, but sources say Malik “rotates” his spouses out to other properties so he lives with only the maximum number at any one time.

Roy Abongo Malik is the son of Barack Obama, Sr., with his first wife, Kezia. He was born in Nairobi, Kenya. He met his half brother and U.S. President for the first time in 1985, when Barack flew from Chicago to Washington, D.C., to visit Malik. Malik and his half-brother Barack were best men at each other’s weddings. Barack Obama brought his wife Michelle to Kenya three years later, and they met with Malik again and other family members.

Malik is a frequent visitor to the U.S., he is a consultant in Washington, D.C., for several months each year. He also runs small electronics shop.