Una James is the mother of convicted murderer, Lee Boyd Malvo -known as the D.C. Sniper, currently serving a life term in prison.

Una’s son was convicted in 2003, along with fellow sniper suspect John Allen Muhammad -for their role in the 2002 shootings that killed 10 people. Malvo was 17 at the time, and the Supreme Court will consider whether Malvo’s sentence should be affected by a 2012 Supreme Court ruling that deemed mandatory life sentences without the possibility of parole for those under 18 unconstitutional in most cases, and retroactive.

The shootings that were conducted over a period of two months represent one of the most notable attacks in the nation’s capital.
Muhammad, who was 25 years older and brought Malvo into the country illegally, was executed in 2009.
At Muhammad’s trial in 2006, Malvo described how Muhammad clothed him, fed him, and made him “a monster.” Malvo said he shot three people and worked as the “spotter” in the other shootings.
Malvo and John Allen Muhammad pulled the trigger from a 1990 Chevy Caprice in Washington, D.C., and its suburbs, in Maryland and Virginia. The two were caught at a rest stop near Myersville in Frederick County more than three weeks after the shooting spree began.

Una James gave birth to her son, Lee Boyd Malvo on February 18, 1985 in Kingston, Jamaica. His mother and father, Leslie Malvo were never married and his father left Una James when Boyd was 5. 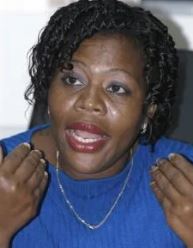 54-year-old Una James was born Una Sceon James in Brinkley, St Elizabeth; she worked as a seamstress in her native country. Around 1999, the single mom met John Allen Muhammad -a U.S. Army veteran and mechanic who allegedly supplied Antiguan passports to people looking to emigrate illegally to the United States; and the two began a relationship. She then left Jamaica illegally leaving her son with Muhammad who in the meanwhile converted Boyd to Islam. James arrived in Florida where she began working.
The mother and son were reunited in 2001 in Miami but according to James they were separated again after Boyd ran away to join Muhammad in Bellingham. The teen attended school for a while in both Bellingham, Washington, and Fort Myers, Florida, alternating between his mother and Muhammad -who falsely listed himself as his father.

After her son was arrested Una James was deported to her native Jamaica in December 2002. Una told media in her country, she felt responsible for her son’s actions but ultimately blamed authorities and social workers for not removing Boyd Malvo from Muhammad’s care when she warned them that he was in danger.
In 2017 she told media she had been fired from her job at a recycling company and had been living on the streets.