Emily Gordon is the stunning and talented wife of comedian and actor, Kumail Nanjiani -who has stunned with an insane body transformation ahead of taking a role in Marvel’s ‘Eternals’

Emily’s husband is widely known for the true-life rom-com ‘The Big Sick’ -you may also know the talented comedian, writer and actor from HBO’s ‘Silicon Valley’ 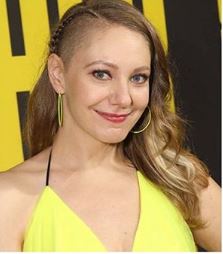 But did you know that, his wife of over a decade is also a big part of the film The Big Sick?
Emily who is a writer, producer and podcast host -was born Emily V. Gordon on May 3, 1979. The North Carolina native shot to fame after co-writing the movie ‘The Big Sick’ with her husband. The 2017 movie is based on their real-life love story.

She studied psychology at the University of North Carolina at Greensboro and also holds an MS/EdS in couples and family counseling.
Emily Gordon was actually a masters-level couples and family therapist and did the deed for about six years before finding her true path. She traded her therapist career for stand up comedy for live audiences and TV; which eventually led to a career as a writer and producer.

Earlier this year it was announced that Emily will join forces with Sarah Hayland on a semi-autobiographical series which will be penned by Gordon.
A former therapist, Gordon’s other writing credits include “Crashing” and “The Carmichael Show.”
Emily Gordon is also known for being outspoken about the sexist treatment she’s received in the industry and the importance of male allies.
She and Kumail Nanjiani tied the knot in 2007 and he is actually her second husband. The couple met at a comedy show in Chicago. Shortly after meeting she was diagnosed with Still’s disease and ended up in a coma. They were married shortly after her recovery.