Gabriella Brooks is the newest model romantically linked to actor and newly single man, Liam Hemsworth. Just weeks ago he was said to be dating Maddison Brown.

Gabriella’s beau schoked following his split from wife Miley Cyrus after tying the knot less than a year in 2018 and having dated on and off again for almost 10 years.
Shortly after calling it quits with Liam, Miley moved on with Kaitlynn Carter, and now she’s dating Cody Simpson.

Last month, he and Maddison Brown were spotted at West Village before stopping at Sant Ambroeus coffee bar. However, the 29-year-old seems to be moving on with another model, Gabriella Brooks. The rumor surfaced after Hemsworth was spotted with Brooks while hanging out with his parents. Reports have surfaced that Liam actually introduced the brunette beauty to his makers while at Byron Bay. 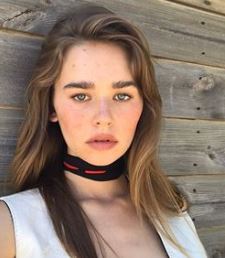 Though is not clear how Liam and Gabriella know each other, pictures from the Daily Mail -appear to show the model, effortlessly getting along with his family.

This is not Brooks’ first rodeo with a famous face. The 26-year-old Brooks was previously in a 4-year relationship with 1975’s musician Matt Healy. She and Healy apparently split over the fall.
Gabriella Brooks who also goes by Gabby Brooks, was born May 18, 1996 in Autralia. She grew up in Sydney, Australia. Her brother Landon is an actor.

Brooks was first scouted when she was 14 years old and has been represented by Viviens Model Management. She’s worked for Pricillas Models, Storm Models and Next Models. As a professional model, she’s known for a SurfStitch campaign she did four years ago.

In addition, Gabriella Brooks also seems to give importance to academics. Back in 2015 she said she was attending Sydney University -where she was an ancient history and archaeology major. Is not clear if she graduated or not.

See a bright future for these two?