Ahlamalik Williams, a young professional dancer is said to be the newest boyfriend of iconic queen of pop, Madonna.

Ahlamalik who is several decades younger than his 61-year-old music icon girlfriend, has toured the world travelling around Europe, America and east Asia to perform on her roadshow.
The two were recently spotted dangerously closed to each other while at a hotel balcony sparking rumors of a romantic relationship taking place between them. So, of course we want to know just about everything on the new boy toy.

According to the Daily Mail, Ahlamalik Williams was born in April of 1994; the California native was born to parents Drue and Laurie Williams -who are also parent to his brother Ahlijah, and sister, LeYana.
His father, Drue Williams, is a US Navy veteran who began his military service in the 1970s and is now retired. His mom, studied criminal law and now works in the Clark County court system as a legal assistant. 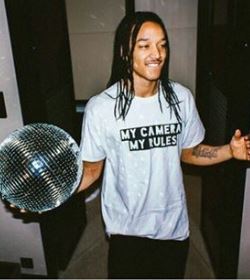 Ahlamalik Williams went to Monterey Trail High School near Sacramento. After graduation he joined up with Cirque du Soleil’s Michael Jackson ONE production in 2013. Two years later, in 2015 he became a part of Madonna’s Rebel Heart tour.
His dance performances have taken him around the world – to Paris, London, Shanghai and Taipei among other locations. The 25-year-old is currently performing on the singer’s Madame X tour which started in September. In addition, he can be found on On Madonna’s tour website -where he is listed as both a dancer and a choreographer.
Other credits as a dancer for Ahlamalik Williams -include, appearing in the 2013 movie Frat Brothers.

The 25-year-old is quite active on social media where he often uploads videos of his dance routines on Instagram, and where he has more than 80k followers. On Instagram he identifies himself with the nickname SkitzO.