Parris McBride is the lovely wife of George R.R. Martin -world renowned for his work as a science fiction and fantasy writer.

Parris’ husband alos known as GRRM -is the man behind A Song of Ice and Fire, which was adapted into the HBO series Game of Thrones. The much celebrated writer was born on September 20, 1948 in Bayonne, New Jersey and has been regarded as the American Tolkien.

His publishing career began after he started writing fiction stories for amateur comic fan magazines. George R.R Martin’s first work titled The Hero was published in 1970 when he was only 20.
He obtained his early education from Jane Donohoe School and Marist High School moving on to B.S and M.S degrees in Journalism Northwestern University, Evanston, Illinois.

Upon graduation, he worked for the Country Legal Assistance Foundation. In 1976, Martin took up teaching Journalism at Clarke College, Dubuque, Iowa. He left teaching in 1978. All through this time, he continued to write part time. By 1979 he had become a full time writer. 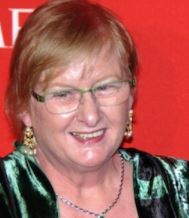 Martin signed on as a story editor for Twilight Zone at CBS Television in 1986. In 1987 Martin became an Executive Story Consultant for Beauty and the Beast at CBS. He was Executive Producer for Doorways, a pilot which he wrote for Columbia Pictures Television, which was filmed during 1992-93.
In addition to his claim to fame series A Song of Fire and Ice and Games of Thrones. His novels such as Dying of the Light, The Ice Dragon and Windhaven have also done well among fiction lovers.
Martin also wrote and edited comic books. Some of the famous ones are Wild Cards, Sandkings and The Hedge Knight. His stories have been translated into German, French, Italian, Spanish, Swedish, Dutch, Japanese, Portugese, Croatian, Russian, Polish, Hungarian, Finnish, and Esperanto.
Martin who is a member of Science Fiction & Fantasy Writers of America -is also a 6 times winner of the Locus Award, 3 times winner of the Hugo Award and a 2 times winner of the Nebula Award.

He is currently married to second wife, Parris McBride. In 1975, Martin tied the knot with Gale Burnick but the marriage ended in 1979.

He met Parris in 1975 at Kublakhan in Nashville. The two became friends and would hang out, however he tied the knot to his first wife. The two got together again in the early 80’s. Parris who at the time worked as a waitress in Oregon made the move to Santa Fe to be be with Martin.
The longtime couple tied the knot in 2011 after decades of being together. They held the ceremony at their home in Santa Fe and later had a bigger ceremony at at Renovation, the 69th World Science Fiction Convention.
Not many more details are known about Parris McBride, however its safe to say she’s been his greatest source of support and has remained his biggest fan. In fact, Parris McBride is so into her hubby’s work that Martin himself revealed during an interview she had threatened to leave him is he killed her favorite Game of Thrones character.

According to Archipelacon, Parris McBride is described as a seller of new and used books and all round promoter of the genre.