Raven Lyn Corneil is the stunning girlfriend of tech mogul, Jack Dorsey -best known as the co-founder and CEO of Twitter.

Raven and Dorsey began dating sometime in 2018, since then the tattooed businessman reportedly bought a mansion for his model girlfriend.
Dorsey cofounded Twitter in 2006 with Ev Williams, Biz Stone and Noah Glass, and was CEO until 2008. He returned in 2015. He’s been CEO of both social media firm Twitter and small business payments company Square since 2015.

Dorsey and Corneil were first spotted together at a Harper’s Bazaar party during New York Fashion Week in September of 2018. Raven is 18-years his junior.
Prior to dating Raven, 42-year-old Dorsey, was previously linked to model turned actress Lily Cole. Raven Lyn Corneil is a brunette stunner who has appeared on Sports Illustrated. In addition to her Sports Illustrated appearance as a member of the rookie class of 2018, the 24-year-old has racked up some impressive credits.
Raven, a Minnesota native, also landed gigs in Vogue Arabia and costarred alongside The Weeknd and Dilone in a campaign for the singer’s Puma line.
As it is to be expected, she’s quite the thing on Instagram where she has racked up over 300,000 followers.
The model, who according to Models.com is of mixed African-American, Puerto Rican, Irish, and Native American descent, regularly updates her followers on her exploits around the world and frequent red carpet appearances.

Last August reports surfaced saying that Dorsey put the pricey pad he bought for Raven, up for sale. It’s yet clear but it appears the lovers are no longer together. 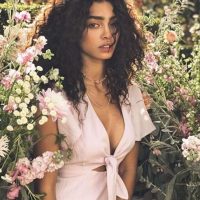 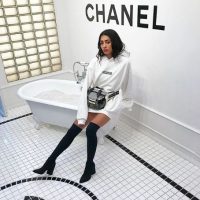 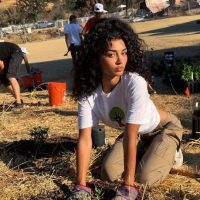